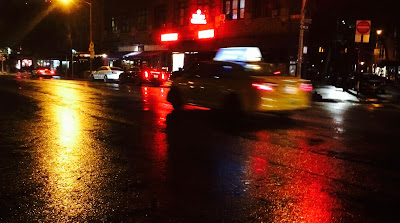 
Sullivan Fortner has a few more gigs in Kansas City before he returns to New York.  His keyboard work with John Scofield’s group in May and with Kansas City based musicians this month has been astounding. 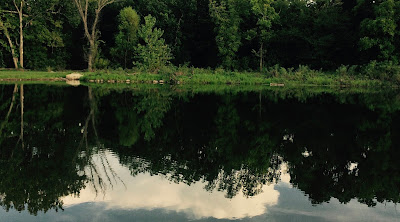 *Joe Klopus interviewed Tivon Pennicott. The saxophonist is in town for the annual Charlie Parker Celebration.

*City Councilman Jermaine Reed insists that the Jazz District “is already experiencing a renaissance” in an editorial published by The Kansas City Star.

*A reader objected to an editorial in the The Kansas City Star about the reasons for poor attendance at the American Jazz Museum’s festival in May.

*Tweet o’ the Week: KC Jazz Ambassadors‏- How do we convince area audiences that a LIVE JAZZ PERFORMANCE is the same kind of once-in-a-lifetime experience.

*From a press release: The Linden Root Dickinson Foundation awarded $25,000 to the American Jazz Museum for the preservation and maintenance of its one-of-a-kind, priceless collection… One of the Museum’s priorities is digitizing the collection of documents, film, and memorabilia amassed by Ohio attorney John H. Baker. Digitizing this collection of over 700 hours of film will increase public access. Completing this project will enable the American Jazz Museum to share these cultural assets with broad audiences and continue promoting America’s musical heritage. 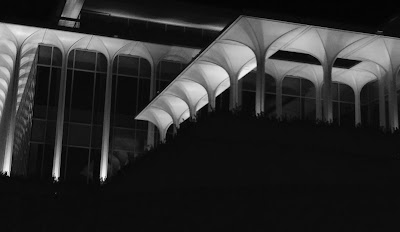 I felt like an interloper intruding on a secret society of Kansas City’s intelligentsia at the 1900 Building last Tuesday.  Even though I paid the $25 (!) admission, I feared that I’d be asked to leave at any moment during the performance by cellist and vocalist Helen Gillet, pianist Brian Haas, saxophonist Jessica Lurie and guest artist Mark Southerland.  A mustard stain on my shirt and the 2 Chainz song that blared from my budget car as pulled into the parking lot made it clear that I wasn’t a member of the rarified salon of about 60.  Even so, I appreciated the adventurous musicians’ blend of free jazz, French chansons and folk.  The repertoire ranged from what may have been an interpretation of the Velvet Underground’s “The Black Angel’s Death Song” to the few minutes of serenity documented by Steve Paul.

(Original image by Plastic Sax.)
Posted by Happy In Bag at 12:34 PM No comments:

Now's the Time: The Project H 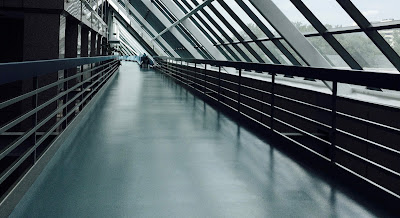 *The Kansas City Star reviewed the MTH Theater’s jazz-based production of “An Evening With George Gershwin.” 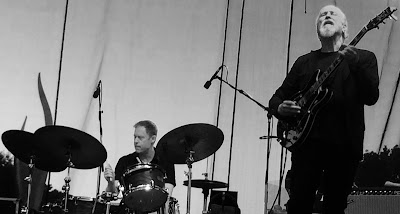 In the aftermath of Saturday’s reprehensible “hatred, bigotry and violence on many sides” statement by the President, I’m receiving a bit of deserved backlash for comments I made to a journalist a few weeks ago.  My assertion that “they’re not racist- they’re just afraid” serves as the headline of an editorial in today’s The Kansas City Star.

While I’m not going to recant my words,  I understand why I’ve been rebuked by a critic who insists that “being afraid of crime when there’s no evidence of crime means that you’re racist.”  Instead, I’ll reiterate two key points.

I’ve never felt threatened or unwelcome during the hundreds of times I’ve visited the Jazz District in the last twenty years,  Once sketchy, the immediate radius of the museum complex is safe.  The Star’s editorial gets that right.  The piece falters, however, in its implied assertion that jazz can still serve as a major attraction.  The successful festivals it cites are headlined by pop, rock and hip-hop acts.

The poor attendance at the American Jazz Museum’s Kansas City Jazz & Heritage Festival three months ago shouldn’t have come as a surprise.  John Scofield, the jazz headliner on the first night of the event, attracted about 400 fans.  That more or less matches the similarly woeful turnout for the jazz giant’s concert at the Folly Theater in 2014 (my review).

(Original image of Bill Stewart and John Scofield at the Kansas City Jazz & Heritage Festival by Plastic Sax.)
Posted by Happy In Bag at 10:33 PM No comments:


Is the New Orleans based Helen Gillet a jazz musician, a classical artist, a French chanteuse or a pop-oriented singer-songwriter?  As she explains in the embedded video, Gillet is all of those things.  She performs Tuesday, August 15, at the 1900 Building.  She’ll appear at the Brick on Wednesday, August 16.
Posted by Happy In Bag at 12:30 PM No comments: 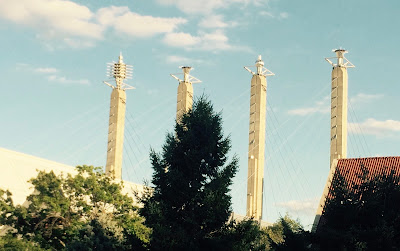 *Marilyn Maye and Houston Person are among the performers in the 2017-18 season of The Topeka Jazz Workshop.

* The Kansas City Star and KCUR reported on how a $7 million infusion of city money has been spent in the Jazz District.

*The Mutual Musicians Foundation has a new site and promotional video.

*Mark Lowrey leads a group in a intriguing arrangement of Soundgarden’s “Fell On Black Days.”

*Downbeat reviewed a series of Pat Metheny outings at a Norway festival.

*Tweet o’ the Week: Ronnie Scott’s- #lastchance to get your tickets to a rare treat! Krystle Warren will perform soon at our club, grab your tickets.

(Original image by Plastic Sax.)
Posted by Happy In Bag at 9:27 AM No comments: 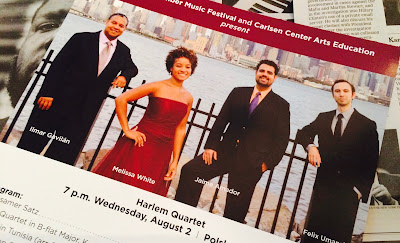 Chris Burnett, the sublime Kansas City jazz musician and relentless social media irritant, insists that the future of live jazz lies in the sort of formal presentations associated with classical music.  His vision seemed particularly prescient during a performance by the Harlem Quartet at Polsky Theater on Wednesday.  The string quartet’s swinging renditions of the jazz standards “Take the ‘A’ Train” and “A Night In Tunisia” enlivened an audience of about 300 that had fidgeted through a dry 20-minute reading of Mozart’s String Quartet #17.  The Harlem Quartet solidified its credentials among Kansas City jazz aficionados in a 2012 collaboration with Gary Burton and Chick Corea at the Gem Theater.  The enthusiastic response of Wednesday’s audience to works by Billy Strayhorn and Dizzy Gillespie indicated that Burnett’s advocacy of jazz listening rooms is entirely warranted.

(Original image by Plastic Sax.)
Posted by Happy In Bag at 3:47 PM 1 comment:


Herbie Hancock performed at the Lied Center in Lawrence in 2011, but the icon will make his first appearance within the city limits of Kansas City in more than ten years at Muriel Kauffman Theatre on Saturday, August 12.  Hancock is joined by Billy Hart, Eddie Henderson, Bennie Maupin, Julian Priester and Buster Williams in the embedded footage from 1972.  Four modern-day heavyweights- Vinnie Colaiuta, James Genus, Lionel Loueke, and Terrace Martin- will perform with Hancock on Saturday.
Posted by Happy In Bag at 10:45 AM No comments: 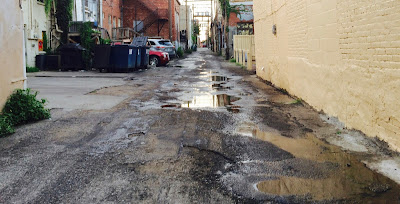 *The schedule for this month’s Charlie Parker Celebration, an initiative that’s billed as “KC’s hottest jazz event of the summer,” has been finalized.

*Jesse Riggins reviewed a performance by Kurt Elling and the Branford Marsalis Quartet at the Kauffman Center for the Performing Arts.

*Millie Edwards was featured on KCUR’s weekly Band of the Week segment.

*Tweet o’ the Week: Clint Ashlock- Is there ANY other profession in the WORLD where non-pros come up to pros and assume they can do the job better, than in music?!

(Original image by Plastic Sax.)
Posted by Happy In Bag at 9:36 AM No comments: