Snarky Puppy is well on its way to accomplishing something few other jazz or jazz-adjacent acts have achieved in recent years: selling 1,800 premium-priced concert tickets in Kansas City.  The group’s Kansas City debut at Muriel Kauffman Theatre on Tuesday, June 11, is almost sold out.  The Kansas City Star named the show one of the top ten concerts of the summer.
Posted by Happy In Bag at 1:15 PM No comments:

*Julie Denesha created a feature about ragtime’s legacy in Sedalia for KCUR.

*Mike Dillon recalls his time in Kansas City in an extensive intereview at Relix.

*Tweet o’ the Week: Magic 107.3- This is #IndigoHour at the @americanjazzmuseum Blue Room (video)

It takes a lot of planning to be spontaneous. That’s the paradoxical takeaway of a performance by Der Lange Schatten at the Blue Room on Monday, May 20.  More than three dozen people heard the German trio’s carefully orchestrated form of experimental chamber jazz at the free show presented by Goethe Pop Up Kansas City.  Der Lange Schatten’s avant-garde explorations were moored by written arrangements.  Even during the wildest moments, reedman Michael Thieke, pianist Håvard Wiik and bassist Antonio Borghini scrutinized sheet music.  I documented a frenetic solo by Thieke and an example of Wiik’s unconventional approach at Instagram.


The elegant pianist Charles Williams accompanies Eboni Fondren at the Phoenix on Thursday, May 23.  Williams will lead a trio at Eddie V's on the second, third and fourth Sundays in June.  Plastic Sax reviewed Williams' fine 2018 album Flavors of Jazz.
Posted by Happy In Bag at 12:47 PM No comments:

*KCUR shares a notification from The Kansas City Business Journal that Ralph Caro has been named as the new interim director of the American Jazz Museum.  Elizabeth Orosco interviewed Caro for Northeast News.

*KC Studio reports that a play about the late Myra Taylor will have “a possible late fall premiere” in Kansas City.

(Original image by Plastic Sax.)
Posted by Happy In Bag at 9:18 AM No comments:

Ghosts in the Machine

Kansas City’s jazz scene isn’t merely haunted by its illustrious history.  The formidable legacy of past masters often seems to suffocate the musicians of today.  That’s one of the takeaways from an exercise I conducted at my nondenominational music blog There Stands the Glass.

The examination of Spotify’s monthly listeners metric for artists associated with Kansas City offers intriguing insights into the consumption of jazz recordings.  Half of the artists in the top ten and 24 of the top 100 are jazz musicians.  Pat Metheny, Karrin Allyson, the jazz-adjacent Oleta Adams and the smooth jazz stars Norman Brown and Julian Vaughn are the only living jazz artists in the top 50.  And the gulf between the iconic Charlie Parker (#10, 495,000 monthly listeners) and his present-day successor Logan Richardson (#99, 1,000 monthly listeners) is astounding.

The absence of many of the artists regularly documented at Plastic Sax is glaring.   I note at the original post that “many ostensible hometown heroes are streamed by only a few hundred users each month.”  Streaming isn’t a zero-sum game- just because someone streams Charlie Parker doesn’t mean they’re not also streaming Logan Richardson- but the extreme imbalance between old and new is frightening.

(Original image by Plastic Sax.)
Posted by Happy In Bag at 12:05 PM No comments:


Christian Swan will perform at the Blue Room on Friday, May 17, and at Westport Coffeehouse on Sunday, May 19.  The keyboardist recently announced that he’s moving from Kansas City to Chicago.
Posted by Happy In Bag at 8:40 AM No comments:

*Nothing in Steve Paul’s thoughtful assessment of the health of Kansas City’s jazz scene for KC Studio will come as a surprise to devoted readers of Plastic Sax.

*As noted by KCUR, Soirée Steak & Oyster House recently opened in the Jazz District.  The venue features performances by jazz musicians every Thursday, Friday and Saturday.

(Original image by Plastic Sax.)
Posted by Happy In Bag at 8:43 AM No comments: 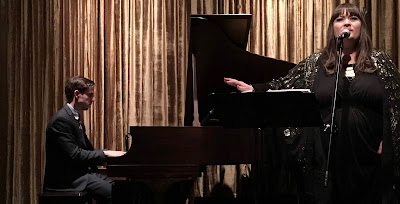 Even though I’d heard Havilah Bruders perform several times with the roots-rock band Cadillac Flambé and I’d listened to her 2017 jazz album Come Rain or Shine, I didn’t grasp the depth of her talent until I heard her sing at a Sunday morning service at my church two months ago.  The Kansas City vocalist’s interpretation of “Love Rescue Me”- a song co-written by U2 and Bob Dylan that had previously failed to resonate with me- delivered a genuinely religious experience.

Bruders’ duet with pianist Paul Shinn in a Friday matinee performance at Black Dolphin on May 10 validated my newfound enthusiasm.  The husky growl, thunderous voice and outsize personality of Bruders remind me of the country star Wynonna Judd.  (Just in case you’re wondering, that’s a compliment.)  I’m extremely skeptical of the clichéd rock-singer-shifts-to-jazz transformation, but Bruders makes the grade.

Shinn recently returned to Kansas City following a stint in New York City.  (His first, second and third albums were reviewed at Plastic Sax.)  Playing as well as ever, Shinn adapted his approach for each selection, seamlessly deviating between barrelhouse piano, cocktail lounge tinkling and elegant swing.  He played the role of Ralph Sharon to Bruders’ Tony Bennett and the Tedd Firth to her Marilyn Maye in the winning cabaret-style outing that merited more than an audience of ten.

A stale repertoire is the duo’s sole flaw.  I’ll need fewer warhorses like “It Don’t Mean a Thing (If It Ain’t Got That Swing)” and more left-field selections like “Love Rescue Me” if there's to be any chance of experiencing another spiritual epiphany the next time I catch the tandem.

Partial first set setlist (I missed the initial selections): Corcovada (Quiet Nights of Quiet Stars); Why Don’t You Do Right?; Crazy; Route 66; Dream a Little Dream of Me; Georgia on My Mind; It Don’t Mean a Thing (If It Ain’t Got That Swing); The Very Thought of You


Pianist Håvard Wiik, clarinetist Michael Thieke and bassist Antonio Borghini will perform at the Blue Room on Monday, May 20, as Der lange Schatten.  The appearance of the Berlin based trio is sponsored by Goethe Pop Up.  The organization brought the Chicago Plan to the Blue Room last month.  (Plastic Sax review.)  Wiik plays a solo piece in the embedded video.
Posted by Happy In Bag at 12:34 PM No comments:

*Since the founding of Plastic Sax in 2007, I’ve made a point of staying out of the business of The Kansas City Jazz Ambassadors.  With apologies to the Plastic Sax readers who have encouraged me to comment on the ongoing behind-the-scenes drama at the organization, I’m not about to start now.

*Milt Abel, Jr. recalls his father in a profile at The Daily Beast.

*Tweet o’ the Week: Drew Williams- How wild is it that in New York, there are entire jazz scenes that think music made after 1940 is way too hip??? Like, if your pants don’t go up to your nipples, what are you even doing? 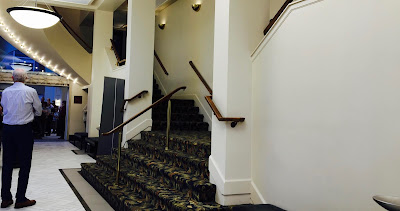 (Original image by Plastic Sax.)
Posted by Happy In Bag at 2:16 PM No comments:

Now's the Time: The Heartland Trio

The Iowa based Heartland Trio is touring in support of its 2018 debut album Year One.  The ensemble led by bassist Hannah Marks will combine deep grooves with delicate folk textures at Mod Gallery on Thursday, May 9.  Details are available here.
Posted by Happy In Bag at 7:51 AM No comments:

*An album review in the June issue of Downbeat suggests that Hazel, the new release by Drew Williams’ Wing Walker Orchestra, is “concurrently vibrant, accessible and subtly sophisticated.”

*Footage of Arturo Sandoval’s concert at the Folly Theater is shared by Joe Dimino.

*Tweet o’ the Week: Kansas City Fed- Today is #InternationalJazzDay! For a fun, educational activity, read "Concert Tours are Where the Real Money Is" with your child and discuss how music artists combine live tours with recorded music to earn their living. (link: https://abcn.ws/2UM8YoW) abcn.ws/2UM8YoW