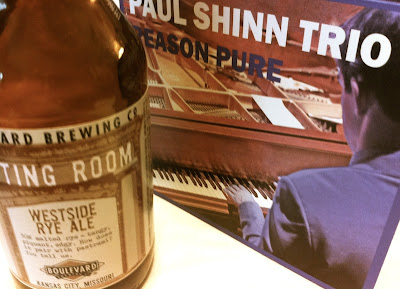 Reason Pure is notable for what it's not.  The debut album by the Paul Shinn Trio, three young musicians who recently cut their teeth on Kansas City's jazz scene, is not another fashion-conscious recording that reflects the pervasive influence of Brad Mehldau and Robert Glasper.

Instead of being in thrall of either of the two trendiest jazz pianists of the new millennium, Reason Pure is a shockingly traditional recording.  Shinn cites Benny Green in the liner notes.  The acknowledgement is telling.  Part of the neo-conservative movement associated with Wynton Marsalis, Green places an emphasis on studying the works of past jazz masters.

Shinn's fluency on Reason Pure would undoubtedly garner Green's approval.  Shinn sounds more like Art Tatum than Tommy Flanagan on a swinging rendition of John Coltrane's "Giant Steps."  The joyful strut of "All the Things Your Are" echoes the work of Oscar Peterson.

Shinn is abetted by two of Kansas City's best-known young musicians.  Drummer Ryan Lee propels "Chalk Mountain" with an insinuating urgency.  The deeply rewarding groove on Miles Davis' "Tune Up" is driven by bassist Dominique Sanders.  A buoyant reading of "In My Life" emphasizes the melody of the Lennon-McCartney song.

The trio goes electric on the closing track "The Ballad of the Missal Robber's Son."  The unexpected transition is jarring.  The new textures are intriguing, but including just a single selection in this format doesn't make sense.  A double album of separate acoustic and electric discs would have made a good album even better.  Perhaps aware that's precisely what Robert Glasper did on his 2009 album Double-Booked, Shinn might have rejected the ambitious concept outright.

In spite of his refusal to be linked to either Glasper or Mehldau, Shinn is anything but musty.  Reason Pure is a fine swing-oriented album that demonstrates the breadth of Kansas City's jazz scene in 2013.   After an extended Sunday night residency at the Green Lady Lounge, Shinn recently moved to Boulder.  Reason Pure is an essential souvenir of his time in Kansas City.

(Original image by Plastic Sax.)
Posted by Happy In Bag at 9:35 AM