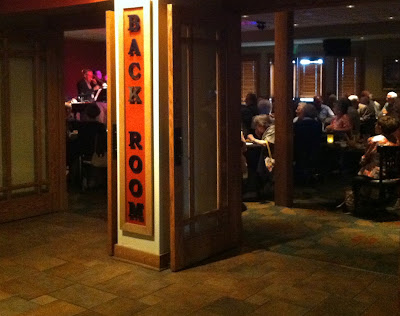 I've been sleeping on one the region's most popular jazz bands.

Until I witnessed the excited frenzy at the Gaslight Grill last Monday, I didn't realize that the New Red Onion Jazz Babies' monthly appearance in the back room of the Leawood restaurant was one of the hottest tickets in town. I hadn't seen the band perform since Jardine's was shuttered and had wrongly assumed that it was running on fumes.

With a average tab that probably exceeds $25, attending the monthly concert of traditional jazz is a pricey proposition.  Even so, reservations for the event are tough to secure.

Gregarious owner Dick Hawk claims that the New Red Onion Jazz Babies is the world's finest Dixieland band. He contributed a bit of enthusiastic keyboard work as he sat in with the large ensemble during the second of three sets.  Lynn Zimmer, the clarinetist who leads a band at the venue several nights a week, was just one of the group's outstanding soloists.

The toe-tapping music is complimented by excellent service and fine dining.   While I'd been oblivious to its popularity, the appeal of the monthly gathering isn't difficult to understand.

(Original image by Plastic Sax.)
Posted by Happy In Bag at 4:49 PM

What was the median age of the crowd?

They are getting paid pretty good at the Gaslight. Does anyone what the Take Five Coffee bar pays per group or person...approx.

I can't support a venue that has the band playing for beer, coffee. pastries, tips or the door. What a joke and what an insult. Shame on the venue and shame on the musicians. Especially the young cats for giving away their craft.
Saul

Saul, your assumptions are incorrect. I can assure you the musicians that play Take Five do not play for pastries. We have ALWAYS compensated our musicians; even when we first started, even when the crowds weren't there. Now they get 100% of door and still have a minimum guarantee to protect them against off nights. We consider the musicians that play Take Five as part of our family. If you have questions about it, perhaps ask one of them, or ask me directly.

I will personally vouch for Lori's statements. The musicians were always well taken care of at Take 5, and now that they have instituted the cover charge, it is even better.

And besides the compensation, musicians want to play there because it is a unique space where people actually LISTEN instead of treating the music like a wall decoration.

Lori and Doug are some of the biggest supporters of this music in Kansas City. And it's not just "young cats" that play at Take 5, check out their calendar for yourself.

Note to "Michael," the author of an unpublished comment left at 5:01- I'm rejecting your submission because of the personal details it contains. Please feel free to try again.