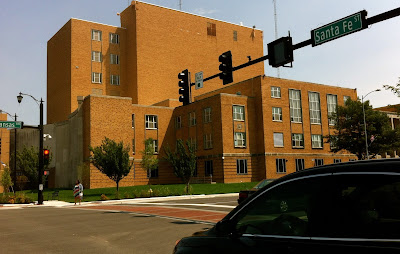 *Harold O'Neal's Man On the Street album was released last week.  The Pitch recommends the pianist's performance at the Blue Room on Saturday, August 17.

*Here's a fresh video of Pat Metheny and his Orchestrion.

*The "other" Kansas City jazz blogger acknowledges his fourth anniversary.

*All About Jazz offers a profile of Mike Dillon.

*The Mutual Musicians Foundation is involved in an effort to bridge the digital divide.

*Comment o' the Week: BGO- What was the median age of the crowd?

*From Clint Ashlock: I've got a pretty exciting concert coming up at mBird Media (Megan's new venue at 2936 Cherry) on August 17th, at 7:30. It's with my big band New Jazz Order, and also featuring my new quintet Forward and sax phenom Allie Burik's group, doing her tunes (instrumental as well as her killin vocals). It's $10 at the door to catch all three bands.

*From Steve Rigazzi: Please join us at Kansas City’s newest Jazz hotspot, Green Lady Lounge…  Owner John Scott and staff are the perfect hosts…  Joining me will be Paul Smith on piano and Tim Cambron on drums. Thursday, August 15, 8-11 p.m.

*From Take Five Coffee + Bar: Want to hear something new? Come hear Allie Burik at Take Five Coffee + Bar Friday night. Watchers of the New Jazz Order big band have seen Allie on the front line, growing in power and command of the alto sax. Here's the kicker: she also has a terrific voice and writes a lot of her own material. Don't miss this chance to enjoy her work before she goes off to Berklee to further hone her many crafts. In the first set Friday night, fronting of an all-star band, Allie will debut a new suite she wrote this summer.  Want to hear a legend? Bryan Hicks is making his Take Five debut Saturday night. Years ago, in college, Doug would drive from Lawrence to Milton's Taproom on Main for live jazz, and often it was the Bryan Hicks Trio. We're thrilled to close the circle and host Bryan at Take Five, backed by some serious power: TJ Martley on piano, Brian Steever on drums and Steve Lambert on sax.

*From Jim Mair: The Kansas City Jazz All Stars program and Kansas City Youth Jazz Orchestra will hold auditions on Monday August 19 and Wednesday August 21 from 3:00 to 4:30pm each day.  I'm looking for the very best kids who are reliable and want to become great players. This will be an intense program but it will be enjoyable at the same time.  I will be leading the group this year and would like to rehearse twice a week on Monday and Wednesdays from 3:30 to 5:00pm at KCKCC. Hermon Mehari will continue to assist.
The cost will be $100 per student…