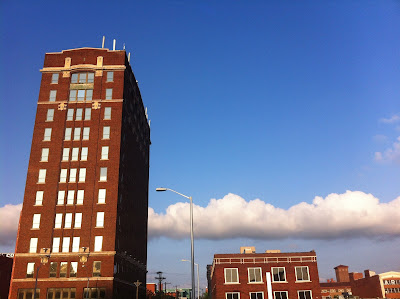 I ran into one of Kansas City's most prominent jazz musicians at a rock concert Saturday.  In addition to enjoying the show along with an audience of over 15,000, he was there to greet Jake Blanton.  Blanton, a one-time fixture of Kansas City's music scene, is currently a sideman for a successful rock band.  It's entirely possible that he plays for more people in a single night than the locally-based jazz musician plays for in a year.

As I waited over 45 minutes in a parking lot for traffic to clear, I wondered if the jazz musician had any misgivings about his commitment to jazz.  Between ticket and merchandise sales, Saturday's event grossed over $600,000.  Most Kansas City-based jazz musicians play for an audience that numbers in the dozens.  And unless they're booked at one of Kansas City's two listening rooms dedicated to jazz, chances are good that they'll face a distracted audience.

As much as I'd like to think that pleasing my refined sensibility with his jazz conceptions is sufficient reward, making that sort of financial sacrifice can't be easy for the man I encountered Saturday.

I listened to Joe Dimino's new Neon Jazz interview with Matt Kane on Sunday.  The loquacious drummer addressed this issue as he discussed the constant indignities faced by jazz musicians in New York City.  Kane said that the challenges force him to constantly "really dig deep and define 'the why'."

"It's got to be for the music. Period," Kane told Dimino.  He lives for "those moments when it's so beautiful and the music is coming through you and people are spiritually uplifted."

While Kane and the attendee of Saturday's rock concert could almost certainly secure more lucrative work in another genre, they remain committed to jazz.  I'm grateful.

I also enjoyed the show Saturday even though the audience around our seats was certainly more "distracted" then your average KC jazz gig...even with smoke and lasers.

Interesting take, but..please tell me you are NOT implying any of the following:

1. Any professional jazz musician could join any big rock band of their choosing and Jake doesn't posses any special skills.

2. He went from playing Jardines for 10 people to Wembley Stadium for 75,000 over night or without any hard work/struggles.

3. Jake made the move away from playing Jazz for the money.


None are true. -Sam

I am not implying any of those things, Sam. And while you're truly exceptional, you're not the locally-based jazz musician I refer to in this flighty piece.

Obviously, not every jazz musician is capable of becoming a commercially viable and artistically successful rock musician. Some musicians are more brilliant and versatile than others. Jake is one of them. So is the anonymous guy I had in mind.

Furthermore, Jake's brilliance was realized in part through hard work and paying dues. I'm not suggesting that he sold out.

I don't believe that jazz is inherently superior to popular music. Instead, I'm appreciative that some brilliant musicians elect not to go that route.

Thanks for clearing up. In case this thread turned into a "is jazz dead/too bad musicians have to sell out" sort of discussion I felt it necessary to defend Jake's honor.

Thanks for the complement, but I know the "anonymous guy" you refer too and that it wasn't me because I was also there to "greet" Jake...we all shared some scotch backstage after the show. -Sam

There is also an assumption in this piece that the rock musicians are not in "for the music. Period." It's a common form of jazz snobbery, saying, "if they really cared about music, they'd be playing jazz."

Jake played in several rock bands in KC and Lawrence while he was here. My guess would be that, at that time, he probably made more money playing jazz gigs than rock shows.

You're comparing playing local restraunts and jazz clubs to touring internationally with one of the most famous rock bands in the world. You're sort of saying, "I'm so glad people commit themselves to playing week nights at the Blue Room, instead of touring with Herbie Hancock."

Jake is in a special position. There are plenty of locally-based rock musicians who play for small crowds and make little money, and they are just as committed as the jazz musicians playing for crowd and making little money.

Thanks for your comment, Peter, but I think you're getting it twisted.

Matt Kane isn't dissing popular music; he's advocating for jazz. In the interview, he talks about how much he's learned from playing hip-hop. But he suggests that hauling his drums across New York City on subways to play low-paying jazz gigs forces him question his career choice. He's playing jazz for love, not to make money.

You're right though- there are countless excellent rock, folk, electronic, classical, hip-hop, etc. musicians who have yet to find an audience. That said, I believe that the majority of today's most creative musicians work in forms other than jazz. For every jazz innovator like Pat Metheny or Brad Mehldau, there are dozens of Kanye Wests and Brian Enos.

And I'll grant you this point- my position is selfish. I'd glad that I'm able to hear enormous jazz talents in small rooms in the Kansas City area.

One last thing. In case it's not obvious, that bit about my "refined sensibility" is a gag.

Jazz musicians taking side jobs backing pop artists has pretty much always been a thing, and it can work out well for everyone.

The jazz players get better money and working conditions than they might otherwise, and the pop (or in this specific case, rock) act gets a little more value than they would with someone who only knows how to read parts off a score (or can't read music at all).

Some people may see this as selling out, but let's face it, everybody's gotta pay the bills, and given the choice, many jazz musicians would prefer some sort of musical employment to a regular day job.

A number of St. Louis players have done this in recent years - Kim Thompson with Beyonce, Russell Gunn with Maxwell, and several others.

Heck, Keyon Herrold took a gig with Cirque du Soleil's Michael Jackson tribute show that, before it's all done, will have provided something like two and half years of steady, well-compensated employment. With any luck, when that winds down, the $$ will keep him going for a while, and he can work on some of his own stuff again.