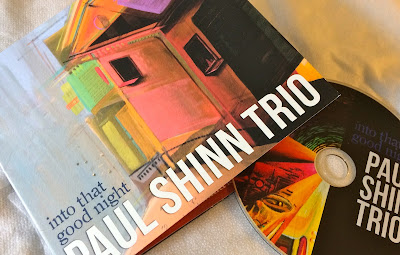 The Paul Shinn Trio is the most thoroughly documented ensemble associated with Kansas City’s jazz scene.  Into That Good Night  is the group’s third studio album in less than three years.  The trio of pianist Paul Shinn, bassist Dominique Sanders and drummer Ryan Lee is entirely worthy of the distinction.

The mainstream jazz created by the three young men has evolved from exceptional precociousness to borderline greatness.  Exposed to Into That Good Night in a blindfold test, most listeners would guess that the trio has a cumulative age of more than 150 rather than less than 90.

An emphasis on melody- a quality often dismissed by youthful jazz musicians- distinguishes the project from the relentless deluge of piano trio albums.  Shinn’s solo reading of Robert Schumann’s “Träumerei” sets the tone.  The trio reclaims the quaint Victor Schertzinger and Johnny Mercer standard “Not Mine.”  The dignified “Too Late” is a contrafact of Charlie Parker’s “Confirmation.”  Shinn originals including the title selection echo the George Gershwin songbook.

Shinn is a polished pianist and the tandem of Sanders and Lee strikes the proper balance between exciting aggressiveness and tasteful reserve.  A fourth album by the trio in the coming months would be entirely welcome.

(Original image by Plastic Sax.)
Posted by Happy In Bag at 3:08 PM