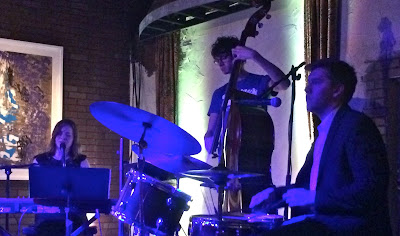 I vowed that I’d never return to Prairiefire after my first trip to the Overland Park development in 2014.  Parking challenges and breathtaking prices at a movie theater convinced me that I just didn’t belong at the popular shopping and entertainment district in Overland Park.

Jazz will make a guy do funny things.  I returned to Prairiefire on Friday to catch the Alyssa Murray Trio at the Art Factory.

A friendly dog greeted me at the threshold of the venue.  A woman who collected the $5 cover charge was equally welcoming.  The low-key ambiance in the small performance space was worlds removed from the glitzy bustle on the sidewalk.

About two dozen people sipped adult beverages as Murray’s band performed a blend of winning original material and astute covers by the likes of Chick Corea and Fiona Apple.

The Art Factory may not entirely fill the void created by the closure of the sorely missed Johnson County venue Take Five Coffee + Bar, but it’s an attractive space with an increasingly ambitious jazz calendar.  My embargo of Prairiefire has been lifted.