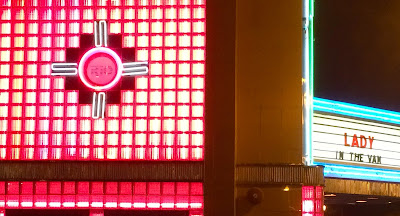 *Jazz in the Woods is no more.  The annual event founded by the jazz musician Vince Bilardo in the 1980s has been rebranded as the SoJo Summerfest.  The headliners at the two-day event in June are a country-rock band and a celtic-rock band.  A press release includes a spokesman's explanation of one of the factors behind the name change: “It also gives us the flexibility to adjust talent booking and event amenities over time to ensure the festival remains relevant for a wide variety of audiences in years to come.”

*Nonesuch Records will release two Pat Metheny albums on May 6.

*Charlie Parker will be inducted into the Apollo Walk of Fame on March 30.

*Patti Austin’s concert at the Gem Theater was reviewed by The Kansas City Star.

*The documentary "Vince Giordano- There's a Future in the Past" will be shown at 7:25 p.m. Thursday, April 14, at the Cinemark Palace at the Country Club Plaza as part of the Kansas City FilmFest.  The New York based bandleader and the film’s co-director Amber Edwards will participate in a question-and-answer session after the screening.

*Tweet o’ the Week: Jack- @SoJo_Summerfest Not sure why you felt the need to mess with something that worked. Always looked forward to the national jazz acts.

*From Stan Kessler: The Sons of Brasil 25 Year Anniversary Celebration!  It's our silver anniversary. We've been playing regularly For a quarter of a century. Unbelievable. The celebration begins the following dates and will continue throughout the summer until we're sick of it. April 2, The Art Factory, 7-9:30. April 15, The Blue Room, 8:30-12:30. There will be SOB trivia contests with prizes for the winners. Personnel: Stanton Kessler-Trp./Flugel, Danny Embrey-Gtr., Roger Wilder-Piano, Greg Whitfield-Bass, Doug Auwarter-Drums, Gary Helm-Perc.

*From Blue Note Records: Following the February 26 release of Shift, Logan Richardson’s assured Blue Note debut, the alto saxophonist has announced May U.S. tour dates in New York, Los Angeles, Boston, and his hometown of Kansas City  (May 23 at the Blue Room)… Richardson’s touring band will feature Mike Moreno on guitar and Sam Harris on piano.