A Jerk Judges the Jazzy Jamdemic 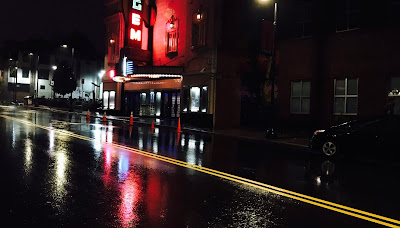 I’ve long believed the only people who use the word “jazzy” without irony are either dullards or sardonic jazz-haters.  So I cringed when I learned of Jazzy Jamdemic just a few hours before the first concert in the series transpired at the Gem Theater on Sunday, May 24.  (Why bother informing a Kansas City music journalist and dedicated jazz blogger about the initiative?)

At a reported cost of $75,000, Jazzy Jamdemic consists of free one-hour streams of live concerts on Facebook at 5 p.m. C.S.T. six nights a week through July 3.  The verbiage at American Jazz Walk of Fame’s site notwithstanding, the events stream only at Facebook.

The unfortunate name of Jazzy Jamdemic belies the high quality of the first six episodes. The sound and lighting of the performances are invariably outstanding.  In spite of the off-putting absence of live audiences and the unsettling but welcome use of face masks by musicians, the concerts are excellent showcases for Kansas City artists.  My notes on the first week’s episodes follow.

Bobby Watson- Sunday, May 24
Congressman Emanuel Cleaver, the apparent driving force behind Jazzy Jamdemic, introduced the first concert by suggesting the series will act as a “painkiller.”  The setlist rendered by saxophonist Bobby Watson, pianist Roger Wilder, bassist James Ward and drummer Mike Warren- “Confirmation,” “E.T.A.,” “A Wheel Within a Wheel,” “Soul Eyes,” “Up to the Minute Blues” and “In Case You Missed It”- was indeed a familiar balm for admirers of Kansas City’s most notable jazz practitioner.  Peak viewership: 114.

Molly Hammer- Monday, May 25
A woman suggested “who needs NYC jazz when we have Molly and the ‘guys’!” during Molly Hammer’s triumphant return to the stage.  If by “NYC jazz” the commenter meant “adventurous,” she was right.  Pianist Joe Cartright, bassist Steve Rigazzi and drummer Brian Steever supported the vocalist with appropriately conventional swing.  A hushed cabaret-style rendition of “Listen Here” was easily the best selection.  Peak viewership: 226.

Based on comments and "likes" during the Facebook broadcasts, the majority of the paltry viewership of each stream consisted of the same people every night.  The well-intentioned Cleaver has miscalculated the intrinsic support for jazz in Kansas City for decades.  From historical and artistic perspectives, however, Jazzy Jamdemic is an entirely vital and necessary endeavor.  It’s a shame about the name.

(Original image by Plastic Sax.)
Posted by Happy In Bag at 1:25 PM No comments:


Mary Lou Williams established a reputation as a stellar arranger and composer while working in Kansas City in the late 1920s.  Her appearance at the Montreux Jazz Festival in 1978 came three years before her death.
Posted by Happy In Bag at 12:12 PM No comments: 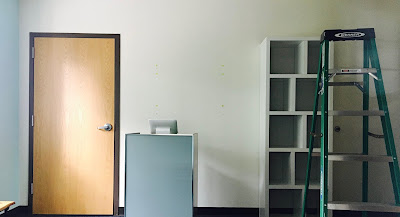 *Ted Panken catches up with Eldar Djangirov for Downbeat.

*Steve Paul checks in with Bobby Watson for KC Studio.

*Patrick Neas promotes the 2020-21 season of the Folly Jazz Series in The Kansas City Star. 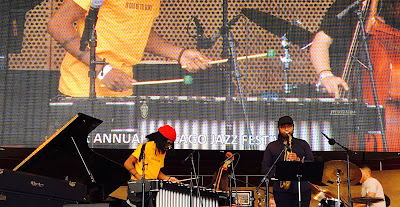 (Original image of Joel Ross at the Chicago Jazz Festival in 2019 by Plastic Sax.)
Posted by Happy In Bag at 2:35 PM No comments:


Coleman Hawkins was born in Saint Joseph, Missouri, in 1904. He attended Topeka High School and Washburn University prior to attaining immortality in New York.  The breathlessness of the hokey hipster narrator in the embedded video is understandable.
Posted by Happy In Bag at 11:06 AM No comments: 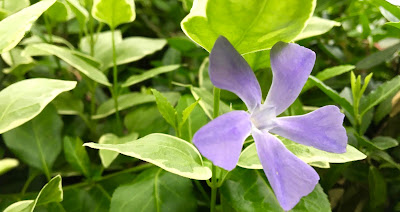 *Lonnie McFadden’s virtual concerts are the subject of a KCUR audio feature.

*Bobby Watson performs and talks about his forthcoming album in a Jazziz “Happy Hour” video.  Watson’s segment begins at the 32:45 mark.

*Tweet o’ the Week: Essential to my wife, so at home- #vinylrecords from my #vinylcollection People into jazz know Kansas City. People in Kansas City know Pete Eye. Pete only put out a couple of records, but they’re really great.

Grading the 2020-21 Season of the Folly Jazz Series 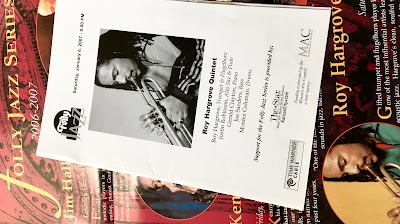 The last concert I attended before the coronavirus lockdown was Luciana Souza’s appearance in the Folly Jazz Series on March 7.  The Kansas City debut of the innovative Brazilian was filled with surprises.  The recently announced 2020-21 bookings in the Folly Jazz Series don’t hold much potential for the thrill of discovery.  Conventional, tried-and-true sounds by touring musicians already familiar to Kansas City audiences dominate the season.  The absence of the centennial tribute to Kansas City’s Charlie Parker- the most important tour of the year- is particularly egregious.

Karrin Allyson
Saturday, October 17
Karrin Allyson rose to fame while living in Kansas City.  Her homecomings are always welcome.  She last performed in the Folly Jazz Series in 2016.
Grade: B

David Benoit
Saturday, December 12
David Benoit’s biography suggests the keyboardist “has reigned supreme as one the founding fathers of contemporary jazz” for decades.  Joined by the son of Mel Tormé, Benoit and his band will revisit his popular 2000 tribute to Vince Guaraldi’s A Charlie Brown Christmas.  The Folly last hosted Benoit’s holiday show in 2015.
Grade: C-

Jeff Lorber
Saturday, January 16
I walked to Line Creek Park in 1977 or 1978 to catch a free Sunday evening concert by a group led by Jeff Lorber.  The fusion band’s saxophonist was a scrawny kid named Kenny G.  Lorber performed at the Gem Theater in 2014.
Grade: C+

Paquito D'Rivera Quintet
Saturday, March 20
The Cuban saxophonist and clarinetist Paquito D'Rivera, 71, is a Latin jazz mainstay.  The former member of Irakere is making his first public appearance in Kansas City in recent years.
Grade: B+

Eliane Elias
Friday, April 9
Eliane Elias has repeatedly proven she’s a sublime performer on Kansas City stages.  The Brazilian chanteuse and pianist last appeared at the Folly in 2017.
Grade: B

(Original image of materials from the 2006-2007 season of the Folly Jazz Series by Plastic Sax.)
Posted by Happy In Bag at 3:17 PM No comments:


Joe Cartwright recently made the world a better place with his upload of a jubilant 1984 performance by the Richard Ross Trio.  The invaluable footage features the late drummer, vocalist and bandleader, pianist Cartwright and bassist Gerry Leonard tearing into a blues number.  Ruth Rhoden, the co-host of KCUR’s sorely missed program Just Jazz, eggs them on.
Posted by Happy In Bag at 11:54 AM No comments:

*The Folly Theater unveiled the 2020-21 season of the Folly Jazz Series.  The bookings will be soon be evaluated at Plastic Sax.

*Tweet o’ the Week: Community Christian Church- We’re bringing Happy Hour to you, so you can enjoy “live” jazz music from our own Tim Whitmer wherever you’re at! Check out our playlist of Tim’s Happy Hour videos any day of the week. #kcjazz #kansascity #kansascityjazz #kcjazz #livejazz #happyhour

*From a press release: 90.9 The Bridge is thrilled to announce KC Bands Together, a two-night virtual concert celebrating the resilience of the Kansas City community and benefiting the Midwest Music Foundation.  KC Bands Together  will feature nearly 20 local musician performances from 8:30 to approximately 11 p.m. on May 15-16. A one-hour highlight reel will air May 22 at 8:30 p.m. on KCPT with an audio version presented on 90.9 The Bridge.  Performers include Hermon Mehari and Krystle Warren. 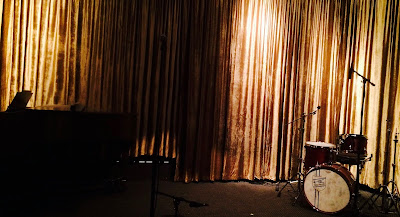 (Original image by Plastic Sax.)
Posted by Happy In Bag at 12:31 PM No comments:


Melba Liston was born in Kansas City in 1926.  The embedded clip from 1960 features the trombonist and arranger performing in a big band led by Quincy Jones.  Randy Weston also benefited from Liston’s groundbreaking work.
Posted by Happy In Bag at 10:34 AM No comments: 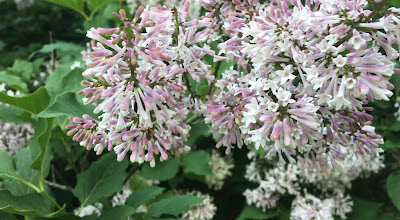 *Jeff Harshbarger and Johnny Hamil’s treacherous trip to Paris is documented by KCUR. 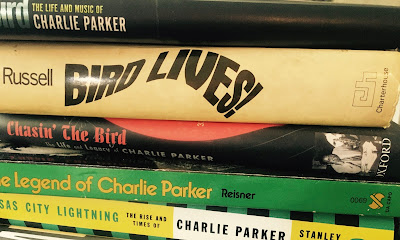