The Shape of Jazz (Concerts) to Come: Flying Lotus at the Midland 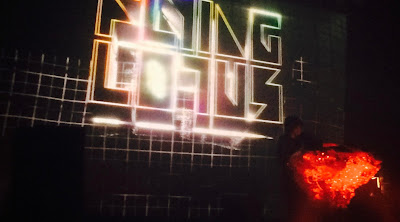 Steven Ellison, the man who creates visionary music as Flying Lotus, offered an audience of more than 500 a peak into the future of jazz concerts at the Midland theater on Thursday.  His 70-minute show expanded the visual and sonic possibilities of jazz.

As demonstrated by “Never Catch Me”, Ellison’s most popular song, the Los Angeles based producer combines elements of cosmic jazz with hip-hop and funk.  Ellison’s 2015 album “You’re Dead!,” one of the most artful distillations of black American music in the new millennium, is a natural extension of Miles Davis’ Bitches Brew and his great aunt Alice Coltrane’s Journey in Satchidananda.

With no live instrumentation other than his occasional scat-inclined singing, Thursday’s spectacle resembled an electronic dance music concert for adults with a taste for jazz.  Wearing glasses that were distributed at the door, members of the audience dominated by people born in the 1980s greeted the introduction of each new 3D special effect like enthusiastic spectators at a fireworks display.

Marveling at virtual spaceships, writhing bodies and confetti will never replace the superior flesh-and-blood experience of listening to elite jazz musicians in intimate clubs, but Ellison has raised for the bar for jazz-related presentations in theaters.

(Original image by Plastic Sax.)
Posted by Happy In Bag at 10:44 AM

Well, it's that time again, when from the far west side of the country, I start to think about my annual jaunt to K.C. for the Xmas holidays to see the family, and I also (embarrassingly) make my annual visit to the Plastic Sax blog.

And every year, I give thanks that's it's still here...still up to date, which is nearly unheard of in today's blog world...and still full of great information.

So in this time of thanks, I thank you. K.C. needs more of you.

I'm a big fan of the more "out" or free-jazz sounds, which I've yet to have any luck finding on my journeys back to K.C., but if you have any suggestions, or bands, locations, etc. that I should keep my eye on for this type of sound, please respond here as I've love to hear about.

Thanks again for all you do.