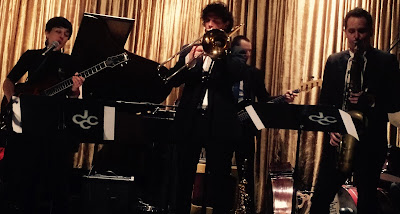 A stunning recital of compositions that bandleader Ryan Keberle characterized as protest songs at Black Dolphin on Wednesday was the easily best thing I heard in January.  Without compromising the music’s integrity, his quintet Catharsis artfully melded jazz with indie-rock, folk and Música Popular Brasileira.

The trombonist and pianist noted his enthusiasm for the jazz revolutionary Ornette Coleman, the Brooklyn indie-rock duo the Welcome Wagon and the Brazilian icons Ivan Lins and Elis Regina, but his band’s intricately arranged chamber jazz put me in mind of Wayne Shorter’s classic 1975 album Native Dancer.

Only about 20 people attended each set, but the meager audience was dominated by musicians.  The galvanizing show is likely to inspire inventive new sounds on Kansas City’s jazz scene in the months and years to come.

(Original image by Plastic Sax.)
Posted by Happy In Bag at 10:42 AM