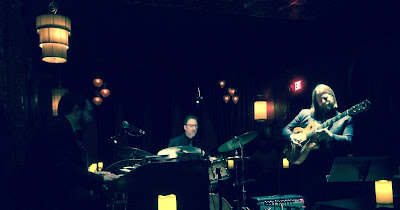 *Marcus Lewis is a recipient of a 2018 Generative Performing Artist Award from the Charlotte Street Foundation.

*Bill Frisell, Thomas Morgan and Rudy Royston will perform at the 1900 Building on April 8.  Tickets are available here.

*Share Valleau objects to the tone of an editorial about the Jazz District published by The Kansas City Star.

*From a press release: The American Jazz Museum, in partnership with Kansas City Public Library and The Kansas City Jazz Orchestra, announces its first ever Jazz Wikipedia Edit-A-Thon, which takes place on Monday, March 5, from 3:00 to 7:00 pm in the Atrium of the American Jazz Museum. The goal of this event is to create and edit articles which preserve Kansas City jazz history, from local musicians, to historic jazz clubs in the 18th & Vine and the 12th & Vine districts, to the community leaders whose legacies continue to live on.

*From a press release: Steve Cardenas' “Charlie and Paul” kicks off Newvelle Records' Third Season. The recording is a deeply personal statement about his long standing band mates Charlie Haden and Paul Motian… Newvelle Records releases music exclusively on vinyl and in six record box sets. Members subscribe to a season and receive one record every two months over the course of a year.