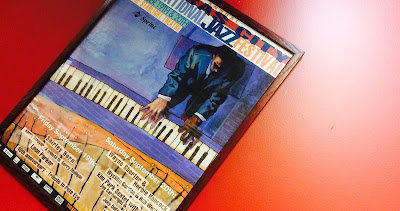 *Plaza III, a venerable steakhouse that has long hosted jazz performances, will close next month.

*Joe Klopus spoke to Josh Nelson ahead of the pianist’s return visit to the Kansas City area.

*Organizers of the Jazz in the Woods festival reiterated previous reports that this year’s event has been canceled.

*Béla Fleck & the Flecktones will perform at the Uptown Theater on July 9.

*Tweet o’ the Week: KC Jazz Orchestra- Always brewing ideas for upcoming concerts - what sorts of music would you like to hear us do? #kcjazz

*Comment o’ the Week: Darrel McKaig- The bassist, Tamir, was my favorite accompanist. While he was highlighted during the duet with Cyrille, his playing throughout was impeccable.

*From a press release: Mikeyy Austin will join the new project from Eddie Moore, We The People, for his Kansas City debut.  Mikeyy is a young up and coming MC out of Lansing Michigan… We The People is a Power Trio plus one with Eddie Moore on piano, Dominique Sanders on bass, Zach Morrow on drums, and Leonard Dstroy on  Turntable/Aux percussion... this fusion group brings Prog Rock, Soul, Funk, and Hiphop together in a unique way that is spread over a bed on improvisation. 7 p.m. March 8, at RecordBar. $8.

(Original image by Plastic Sax.)
Posted by Happy In Bag at 8:42 AM