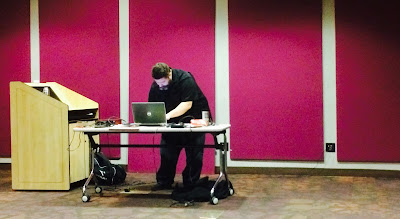 There was no chance I would miss the discussion of Ornette Coleman’s groundbreaking 1958 album The Shape of Jazz to Come last Monday at the Lucile H. Bluford Branch of the Kansas City Public Library.  I was so giddy about the recondite event that I arrived an hour early.  While I couldn’t persuade the library’s two security guards or the disorderly vagrants they were minding to attend the seminar, my enthusiasm was shared by a handful of attendees at the listening party sponsored by The Kansas Jazz Orchestra.

John Kizilarmut, the passionate and knowledgeable moderator, set the tone for his presentation by playing a polarizing track by Mostly Other People Do the Killing.  In addition to providing context for The Shape of Jazz to Come, Kizilarmut shared a photo that his research led him to believe acted as the inspiration for the album’s lead track “Lonely Woman.”

The small class listened to the first side of the album in reverent silence.  After Kizilarmut added additional insights, a loudmouth blogger instigated debates as the second side played.  Clint Ashlock, the Artistic Director of the Kansas City Jazz Orchestra, will analyze Maria Schneider’s Evanescence at the Central Library on March 12.