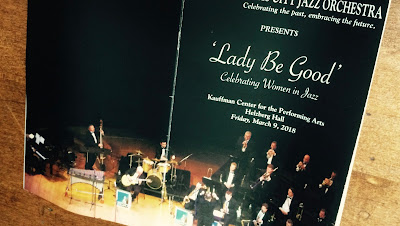 A wondrous rendition of Carla Bley’s “Who Will Rescue You?” at Helzberg Hall on Friday was a pivotal step in the evolution of The Kansas City Jazz Orchestra.  Bley’s 1990 composition can hardly be considered cutting-edge, but the inclusion of the subversive blues in the ensemble’s “Lady Be Good: Celebrating Women in Jazz” program signals the willingness of Clint Ashlock, the organization’s Artistic Director and Conductor, to advance the group’s repertoire.

Women were partly or wholly responsible for each of the evening’s selections.  The commendable theme led to a vibrant reading of Mary Lou Williams’ “Roll ‘Em,” Brad Gregory’s thrilling tenor saxophone solo on Melba Liston’s arrangement of “Let’s Get Down” and a rhapsodic flugelhorn feature by Ashlock on Maria Schneider’s chart for “My Ideal.”  No one near me in the least expensive $25.25 seats amid the audience of about 900 flinched at the concert’s edgiest moments.

Guest artist Jo Ann Daugherty contributed to several selections.  It’s not a slight to the orchestra to suggest that the pianist's absorbing playing on the original composition “Elsewhen” featuring only the pianist, bassist James Albright and drummer Sam Wisman was a highlight.  Given the program’s theme, it would be negligent to fail to note that every member of the orchestra is male.  The strength of the program reinforced the injustice of the discrepancy.

The Kansas City Jazz Orchestra has had three distinct phases since its debut in 2003.  The big band began as a hard-charging swing ensemble in the tradition of the Count Basie Orchestra under the direction of co-founder Jim Mair.  The sound of the group shifted when Kerry Strayer, an acolyte of Gerry Mulligan and Bob Brookmeyer, succeeded Mair.  Friday’s impressive concert indicates that Ashlock is committed to fulfilling the Kansas City Jazz Orchestra’s mission statement of “celebrating the past (and) embracing the future.”

(Original image by Plastic Sax.)
Posted by Happy In Bag at 10:51 AM