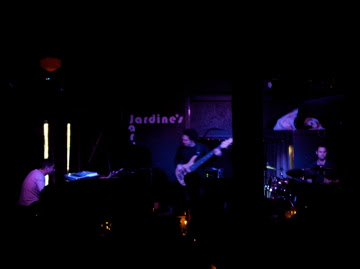 During the first of Eldar's two sets Saturday, a friend likened the three men on the stage of Jardine's to caged lions at a zoo. They did, in fact, seem restless, agitated and unnaturally inhibited.

It's just idle speculation on my part, but I suspect that Eldar and his band were uncertain of how to best address the wildly different expectations held by the various factions of the near-capacity audience.

The older set probably longed for the polite swing music they heard Eldar play as a prodigy growing up in Prairie Village. Affiliates of the jam band crowd were also in the room. They were hoping for the adventurous grooves popularized by Medeski Martin & Wood. And a handful of curious jazz musicians were on hand; they wanted Eldar to bring the noise.

An unsatisfying compromise resulted. Eldar seems to be attempting to fuse classic Stanley Clarke with Thelonious Monk's ugly beauty. But by approaching it hesitantly, Eldar failed to make much headway toward his new direction.

At least it was loud. For the first time ever at Jardine's, I thought about retrieving the earplugs I keep stashed in my car. But the bracing volume brought to bear by Eldar, bassist Jose Armando Gola and drummer Ludwig Alfonso only masked the lack of focus. There were shockingly few moments of clarity.

It's entirely likely that the trio later locked in on the sort of sustained inspiration on display in the previous Plastic Sax post. Brilliant, forward-thinking musicians aren't likely to go on extended cold streaks.

(Original image by Plastic Sax.)
Posted by Happy In Bag at 9:39 PM

That's precisely why I don't go to the concerts: I wouldn't be able to tell when the moment of clarity occurred. I get a similar feeling at a baseball game when everyone is cheering and I am looking around like a lost schmuck.

I hope a reader will tell me that the genius of Eldar changed his or her life this weekend. And my bad review should in no way invalidate that sentiment.

But your analogy is appropriate. Musicians- and athletes- feed off the crowd's energy. And no one was cheering wildly for Eldar Saturday.

Your thesis assumes that jazz musicians think like jazz critics, but finding a groove is a tricky thing even for artists working at the top of their game. You could as easily blame jetlag or a missed nap. Or yourself for seeing the early set!

You're right, of course, Lee.

It's entirely fair to fault me for not articulating this point more precisely:

Eldar and his colleagues weren't just going through the motions. They're brave artists attempting to explore new territory. It's only natural that their noble experiment will occasionally run aground.

Sounds like you were listening to "Steroid Jazz" again with Eldar.

Eldar is a phenomenal technician. He does Oscar better than Oscar. (A hybrid of Oscar, Chick and a skoche of Herbie). With Oscar Peterson you feel like that when you've heard one solo you've heard them all. (I've got probably a two dozen OP recordings) in comparison to Bill Evans or Wynton Kelly which always sound fresh and new.

At the moment, Eldar can function in his trio or as a solo pianist. His ability to interact in an ensemble any larger than that is a testament to his musical maturity and the narcicisim (sp?) that he has been subject to for two decades.

By age 30 he may be regarded as just another great pianist. It depends on his compositional development and his ability to communicate the language in a more thought provoking and well balanced manner.

I can only assume that in New York their crowd is much much younger. They left to go catch the end of the ssion show in the bottoms.

Your comment offers incredibly interesting insights, Anon 12:19. And it offers further evidence, Anon 11:21, that Eldar is well on his way to freeing himself of the "phenomenal technician" albatross around his neck. In spite of my review, I continue to believe in Eldar's potential.

As a footnote to Anon 11:21, Oscar Peterson didn't make his American debut until he was 24, two years older than Eldar is now. (About 10 years ago, NPR aired this story about it: http://www.npr.org/templates/story/story.php?storyId=1064207). Almost six decades of great playing lay ahead. I hope the same is true for Eldar.