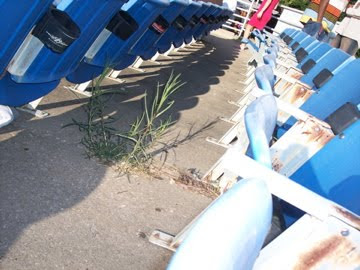 *The Pitch gets the scoop on the Bird Lives Festival. The best news for most fans is that the Mutual Musicians Foundation will host "two outdoor stages with jazz & blues performances" on August 29.

*The Star reports that R Bar, a venue in the West Bottoms, is slated to open later this year. It "will feature jazz and bluegrass bands."

*Former Kansas Citian Terry Teachout recently asked "Can Jazz Be Saved?" in an essay published by The Wall Street Journal. Several commenters on the piece cite the lack of radio support and formal music education as culprits in jazz's declining popularity. I don't buy it. Just last night I stood amid of crowd of 2,000 people at Crossroads listening to a bluegrass band. Ticket prices began at $25. The night's headliners receive no commercial radio play. And as far as I know, bluegrass isn't taught in school. The same is true for thousands of extreme metal, gangsta rap, conscious hip hop, jam band and electronica acts that enjoy massive underground support. My point? Fans manage to find the music that is most relevant and compelling to their lives. Jazz, by and large, doesn't rate.

*It's the talk of the town. In a music trivia match Monday at the Record Bar, my teammates and I failed to identify a Charlie Parker track. How humiliating! My excuse? DJ Robert Moore seemingly used a remastered mix that sounded too contemporary to be a Parker recording. Still, I'm deeply shamed.

btw... heard an interesting tune by a band called the Coconut Monkeys. kinda jazz, kinda not. very interesting - like a mash-up.

I've always felt, Anon, that jazz and bluegrass were actually quite similar. Here's why:
*emphasis on instrumental prowess
*lots of extended soloing
*vocals optional
*rigid sense of tradition
*both are indigenous American musics
*both are clearly outside mainstream culture