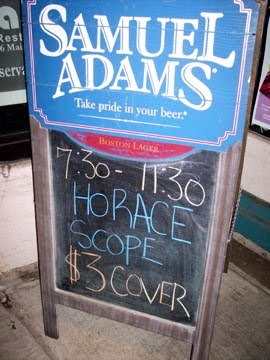 Joyous and bluesy, the compositions of Connecticut-born Horace Silver have a great deal in common with the soulful swing associated with Kansas City jazz. So it makes perfect sense that several of Kansas City's elite jazz musicians regularly perform Silver's songs under the auspices of HoraceScope.

Silver classics including "Peace" and "The Cape Verdean Blues" were respectfully rendered. But there was a problem.

I had hoped that Jardine's new modest cover charge policy would dissuade idle chatter while musicians were on stage. I was wrong. Many of the 35 people in attendance simply couldn't stop talking.

The cacophony sounded exactly like this. Kessler's solo in the video is lovely. I imagine it would have been even better had he been able to hear himself think.

I would have loved to hear HoraceScope take on "Senor Blues," my favorite Silver song. After thirty minutes, however, both my cash and my patience were depleted.

(Original image by Plastic Sax.)
Posted by Happy In Bag at 12:55 PM

I wonder if I can implore you to refrain from your comments about the chatter at Jardines. It really does no good for anyone. All it accomplishes is to discourage potential listeners, the very people we went, from showing up. The fact is that the night you were there was a fun night for us and the chatter was a minimal distraction. We need the business to keep the doors open. A jazz club that's a little noisy is better than not having one.
Again, I don't know where you were sitting, but I have usually been able to solve the problem by moving to another spot. Furthermore, feel free to ask a patron to quiet down so you can hear-be proactive. You, the customer, have the power! Please remember, it's not a concert hall, it's a club, and people are allowed to talk. Having said that, yes, there are times when it's disruptive for the band, like shouting, screaming or loud talkers in your lap. But, that night was not one of them.
Your site is wonderful and you are a great ally to the musicians in town. I respect what you are doing for us all. Please, for our sake, to try to keep it positive and remember that we are all struggling to make a living out here. Your influence can certainly be a benefit.
Peace, Stanton

Thanks for checking in, Stan. As the comments in the post suggest, I'm a fan. I also love Jardine's. Still, I'm not a mindless cheerleader. I'm compelled to share my opinions, be they positive or negative. That said, I'd rather sit in a jazz club packed with screaming customers than have the room all to myself.