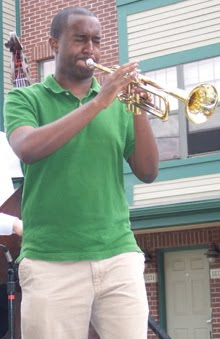 Diverse. What an atrocious name for a band! Not surprisingly, the group's song titles are similarly lame.

Those two objections aside, I absolutely adore the self-titled debut album by Diverse. In fact, it's my favorite jazz album recorded in the Kansas city area since Passages, the 2006 release by the late vocalist Gregory Hickman-Williams.

Diverse recalls the pleasant grooves of seventies albums by the Blackbyrds, Freddie Hubbard, Stanley Turrentine and Grover Washington, Jr. Yet Diverse is anything but a throwback act. The rhythm section, for instance, often implies an keen awareness of hip hop.

Not every note in Bobby Watson's hands-off production is perfect, but everything seems entirely heartfelt and completely honest. It's the musical equivalent of a veteran basketball coach doing little more than tossing a ball on the court and telling his team to play hard. And the five young members of Diverse do just that. Each is an outstanding player, but it's the inventive efforts of drummer Ryan Lee and keyboardist John Brewer that contribute the most to the band's unique identity.

Diverse works best as a cohesive whole; no one moment is definitive. Still, fans of the classic Blue Note sound will be impressed by the opening line of "Vitality." It sounds as if it was pulled from an unreleased Kenny Dorham date. The melodic "B-Day Song" could be mistaken for a Robert Glasper cover of a Chick Corea tune. And Najee would applaud the breezy "Sojourner." The cumulative effect makes Diverse an ideal soundtrack for both backyard barbecues and intimate candlelit dinners.

(Original image of Diverse trumpeter Hermon Mehari by Plastic Sax.)
Posted by Happy In Bag at 10:48 AM

I'll eventually get around to sharing my thoughts about last weekend's activities. (My Diverse review simply couldn't wait.) Until then, I encourage Plastic Sax readers to take a look at Jason's tough editorial.

I had heard about the event at the Foundation from an interview last Tuesday afternoon on KKFI around 4 p.m.; the exec director of the MMF was on-air talking about it. I don't go out much anymore but it sounded like a lot of fun and I was hoping it would be successful. I had no clue about the museum's effort. Now, in reading the editorial, I'm sad to learn that there was apparently no cooperation to make this a grander, unified event. Maybe next year, huh? - Mike T.

The MMF really outdid themselves!
Hats off to Betty Crow and also to Dean Hampton and Dawayne Gilley.

I attended the Sax Salute to Bird, the Chicken feast/jam session and the photo shoot.

Superb job to all. Your grass roots efforts are appreciated.