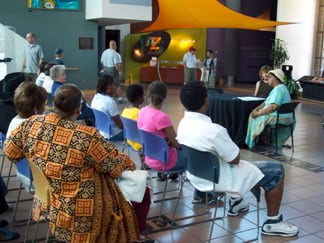 *A feature at the The Smithsonian notes that August 27 would have been Lester Young's 100th birthday. The author wonders why there's no statue of Prez in Kansas City.

*This weekend's Charlie Parker-related events are run down by Mark Edelman.

*Diverse is profiled by Joe Klopus. They also have a great new site. And the group's debut album received a positive review at All Music.

*I spend a lot of time monitoring Miles Bonny's seemingly constant multimedia attack, but the Pitch featured a wacky live performance video from Berlin that I somehow missed.

*I'm rather embarrassed that I didn't know that Kansas City was hosting the forthcoming Second International Conference on Minimalist Music until today. (Tip via Tony's Kansas City.)

*Big-time jazz writer Howard Mandel reached out to Plastic Sax to solicit support for a forthcoming Twitter and Facebook campaign to counter recent reports suggesting that the audience for jazz is aging and declining. I told Mandel that while I'd link to his effort, I'm afraid I don't see many people under the age of forty at jazz events. Mandel's jazz blog is Jazz Beyond Jazz. (EDIT: Mandel asks fans to Tweet #jazzlives from jazz performances.)

(Original image of last Saturday's Stories On the Vine at the American Jazz Museum by Plastic Sax.)
Posted by Happy In Bag at 12:25 PM

I've got another update for you! Last Thursday night there was a TEDx event held at the Nelson, where Mark Southerland and the Urban Noise Project gave an incredible performance. (It was about 20 minutes long, part of an evening of multiple presentations.) The video will soon be online through TED.com, and I'll be sure to share it with you when it's available.

I'm a lay and casual KC jazz observer, but this blew me away and made me very excited for the experimentation happening out there!

Thanks again for what you do here --

Your occasional comments at Plastic Sax thrill me, Janette, because you're precisely the sort of person the jazz scene so desperately needs. (Click Janette's name to see what I mean, Plastic Sax readers.)

And yeah, Mark Southerland does some really cool stuff.

Experimental music and free playing takes alot of discipline to perform. Having had the opportunity to study experimental playing with Dave Holland, Kenny Wheeler and Muhal Richard Abrams and knowing alot of experimental players, it is safe to say that the majority of them are mediocre technicians on their instruments and not fundamentally sound.

You should be able to play inside the changes before you can play outside.

New music is awesome but not as an excuse for bad technique, tone and fundamentals.

I'm flattered, Anon, that you took the time to comment at Plastic Sax. Contributions like yours are invaluable. Would you agree, however, with my assertion that the ability to convey thoughts, emotions and ideas, even when expressed with poor "technique, tone and fundamentals," is the most essential component of music?

I absolutely would agree however imagine getting into a passionate discussion with someone (we all have at some point)who is not informed on a topic or is speaking on a purely emotional level. After awhile, it would be hard to take them seriously.

Jeff Harshbarger is a guy that can play at the highest level in any style of music. I'm not sure we can say the same about some of his experimental colleagues.

Wynton is not a sacred cow however I heard him say that music in his opinion has to be organized sound.

Thanks for the forum