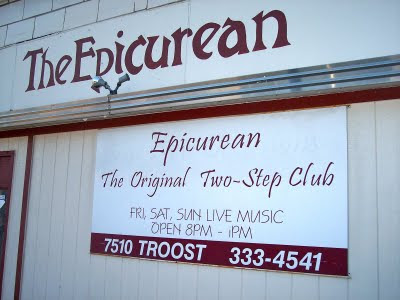 I was forced to swallow a bitter cocktail consisting of two parts nostalgia and one part disappointment last Sunday afternoon.

Eager to get the Chiefs' painful loss to the Raiders off my mind, I scanned MySpace's live music calendar. Lo and behold, contemporary jazz band AfterGroove was playing a matinee show at the Epicurean.

The Epicurean! I hadn't been to the club at 75th and Troost in years. I was a regular when it served as one of Kansas City's many jazz-oriented venues in the '80s and early '90s. Claude "Fiddler" Williams played to attentive audiences in the space. I also recall that the funky sound of organ jazz combos would often pack its dance floor.

It saddened me to witness such a desultory scene on the site of so many past glories. Besides, AfterGroove is really good at what they do. While their David Sanborn-based sound isn't exactly to my taste, AfterGroove surprised me by playing selections from two of my longtime favorite albums, Herbie Hancock's Maiden Voyage and Wayne Shorter's Native Dancer. This video captures their approach.

The poor attendance shouldn't have surprised me. The Epicurean doesn't advertise. They don't use Twitter. They don't even have a web site. Furthermore, while musicians are under no obligation to submit their dates to me for inclusion in the Kansas City Jazz Calendar, it's discouraging when they fail to do so. At least AfterGroove listed their gig at MySpace. It managed, after all, to get me to their show.

Nonetheless, the bad taste in my mouth remains.
Posted by Happy In Bag at 10:14 AM

The Kansas City Jazz Orchestra was on fire Friday night at the Folly Theater and a had a great house. Probably 700 people.

The group played with precision and soul. The lighting was excellent and the sound was good too. It is so enjoyable to hear jazz in a listening environment.

That's great news, Anon! Thanks for the report.

I checked out a band at the Epicurean one Sunday, it was early evening. The bartender was prepping the entire time I was there but it was dead. Apparently it gets super packed on weekends. She said that soon it would be wall to wall people.

With its great location and long history, Carrie, I don't doubt that the Epicurean does well with the "grown and sexy" set. I'd love for someone to tell me otherwise, but I suspect it's a DJ playing R. Kelly rather than a saxophonist playing C. Parker that packs the place.