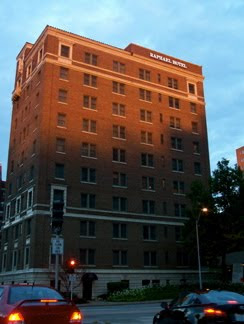 *The grand opening of the John H. Baker Jazz Film Collection Exhibit is September 18 at the American Jazz Museum. The collection was purchased in 1984. Baker publicly screened portions of the collection to a Kansas City audience in 1985. A quarter century later, we're told that approximately one percent of the collection has been digitized and that "one half of one percent" is available for viewing at the exhibit. It's unclear how much of the material is unique to the collection. It includes, for instance, this famous live footage of Charlie Parker and Dizzy Gillespie, but that clip has been widely available for years. And much is made of Bessie Smith's performance of "St. Louis Blues," but anyone can watch it right here. As I asserted last month at Plastic Sax, this wondrous footage contains some of the greatest art of the last century, yet most of it already seems to be available to anyone with an internet connection. At the very least, however, American Jazz Museum visitors might be inspired to explore additional treasures online.

*KCTV reports that a jazz program in the Kansas City Missouri school district has been suspended.

*In an editorial in which he fondly recalls several memorable performances, KCJazzLark writes: Jazz is poised to surge in Kansas City. The talent here, young, mid and old, is too collectively overwhelming to not be noticed, to not be heard, to not overtake jazz apathy.

*Here's the money line of an outrageous (and devastatingly funny) roast of the Kansas City Chiefs at Deadspin.com: Oh, I know KC has barbecue and jazz. Well, I f**king hate jazz. Jazz is scat singing with horns. The only reason people listen to jazz is because they like the idea of being someone who listens to jazz.

*I'm afraid to ask how much it costs to get into the Symphony Ball. The September 19 event stars Karrin Allyson.

*I dare you to listen to a KKFI DJ's interview with Ben Leifer and Hermon Mehari of Diverse without cringing. It streams here at Diverse's site.

*The fall jazz season is previewed by Michael Pettenngell.

*I overlooked the August 24 street date of Eldar's Virtue.

*Mary Lou Williams, the pianist who made her name in Kansas City, would have turned 100 in 2010. Jazz at Lincoln Center is searching for "the next Mary Lou Williams". (Found via Peter Hum's Jazzblog.)

*Want to look at a zillion photos of Miles Bonny in Berlin? You're in luck.

*Allen Toussaint will perform at the Folly Theater on January 8. The event is listed at the amazingly comprehensive Kansas City Jazz Calendar.

*"Our Town's Got the Beat" insists Mark Edelman.

*Jazz musicians, you're clearly ignoring my incessant ranting about your shamefully weak online efforts. Maybe you'll listen to this guy instead.

(Original image by Plastic Sax.)
Posted by Happy In Bag at 1:50 PM