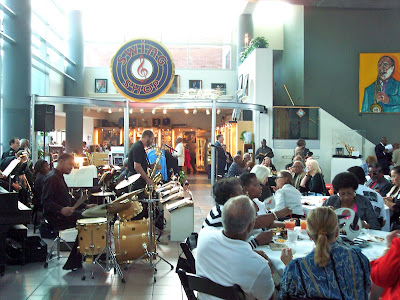 I could hardly believe the words were coming out of my mouth.

"As the man in charge," I told Gregory Carroll as I looked him in the eye Friday night, "You deserve credit for making this happen."

Perhaps no one has been more publicly critical of the American Jazz Museum's struggles than Plastic Sax. I began badgering Carroll with constructive criticism when he was hired as the museum's CEO two years ago.

I had a temporary change of heart while attending the ribbon-cutting ceremony for the grand opening of the John Baker Film Collection.

Blame the Louis Neal Big Band's lovely charts of hits by Al Green and Stevie Wonder. Or maybe it was the free macaroni and cheese from the Peachtree. Perhaps I was swayed by Rep. Emanuel Cleaver's passionate defense of his use of earmarks to secure funding for the museum and for the Mutual Musicians Foundation. He asserted that there's not a single museum in the United States that can support itself solely by income generated by visitors.

Whatever the cause, I'm giving Carroll and the museum a break. After all, it's not Carroll's fault that interest in jazz is at an all-time low. It's not Carroll's fault that no corporations stepped in to help fund the restoration of the John Baker Film Collection. (I'm assuming, for instance, that AMC Entertainment was given the hard sell on a sponsorship opportunity. If not, I rescind all my kind words.)

The fact remains that a quarter-century after the collection was acquired by the city for $200,000, a portion of the films are finally on permanent display in Kansas City. No one, not even the museum's harshest critics, can take this significant accomplishment away from Carroll. (Original images of Friday's festivities by Plastic Sax.)
Posted by Happy In Bag at 12:59 PM

Did that Peachtree mac 'n cheese lose any flavor while being shipped from P&L?

Seriously, I didn't until recently realize the significance of Peachtree moving from 18th & Vine to P&L. But I guess that's for another discussion.

Thanks for covering this, for real. I totally slept.