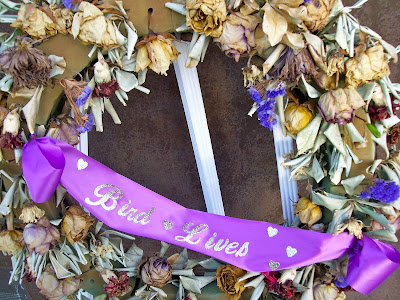 *An examination of the life of John Baker in the Columbus Dispatch is essential reading for anyone interested in the man behind the new film exhibit at the American Jazz Museum.

*Road rage may have been responsible for the recent murder in the jazz district. (Tip via TKC.)

*An editorial lambasting the jazz district is rather unsettling. And what's with its title?

*Need a laugh? Jazz pianist Michael Martin cold-calls wildly inappropriate forums in a wacky attempt to secure a gig. His effort is most amusing.

*Hermon Mehari of Diverse was interviewed by two radio stations.

*I recently downloaded a February performance at the Record Bar by Brandon Draper. It's available at the Live Music Archive here.

(Original image of wilted "Bird Lives" wreath by Plastic Sax.)
Posted by Happy In Bag at 9:30 AM