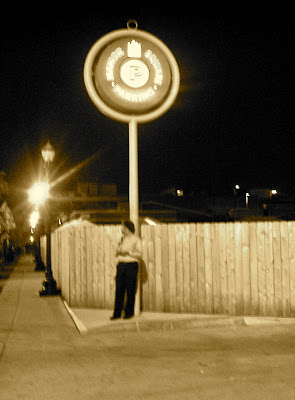 It's as if you're not even trying.

Dear members of Kansas City's jazz community- I respectfully implore you to wake up!

As I watched the Yankees defeat the Phillies last night, I compiled a list of representatives of Kansas City's jazz community on Twitter. The immensely popular social media site rolled out the new "list" tool about ten days ago.

I came up with a pitifully small 30 accounts. Take a look at the Kansas City Jazz Twitter List.

Why should you care? Twitter's new list tool allows the viewer to cut through the noise to see only a particular subset of users. In this case, my list provides a snapshot of the activity that is- or isn't- happening in Kansas City's jazz community.

Twitter isn't anything new. I first mentioned Twitter at Plastic Sax in June of 2008. It's now safe to say that it's not a fad.

Here are two case studies that demonstrate why Twitter matters.

A major jazz concert took place in Kansas City on Saturday. Only about 200 people showed up. Four out of every five seats was empty. And guess what? Neither the venue nor any of the seven musicians featured that night employ Twitter.

Meanwhile, a couple hundred people payed a hefty cover charge at a nearby club for local band The Hearts of Darkness. (The band was featured at Plastic Sax four weeks ago.) Bandleader Les Izmore used his Twitter account (and Facebook) to encourage fans to buy tickets in advance. He posted regularly on the day of the show. His topics ranged from suggesting that fans take naps to complaining that the venue's pre-show music was inappropriate. Sure enough, the gig sold out. Izmore later thanked fans for their support.

While Twitter wasn't the only factor, there's no doubt that it played a role in the choices made by Kansas City's most passionate music fans on Saturday. Still unconvinced? I also created a Kansas City Hip Hop Twitter List as I watched the great CC Sabathia. It contains 105 accounts and scrolls so quickly it reads like a stock ticker.

Love it or loathe it, it's clear that Kansas City's hip hop community demonstrates significantly more energy and enthusiasm than the members of Kansas City's jazz scene.

Is Kansas City a jazz town? It looks more like a hip hop town this morning.

(Original image by Plastic Sax.)
Posted by Happy In Bag at 5:37 PM

Are you available for hire? With three jobs (I'm not complaining)and kids I have a hard enough time finding time to learn new editions of Microsoft products, loading my jazz library on my ipod and figuring out my new cell phone.

People that have time to Twitter, use Facebook and My Space and keep them updated are either retired, unemployed from full time work or without a family.

Your services and insight could really help someone like me.

I going to assume, Anon, that you're not busting my chops. The beauty of Twitter and Facebook is that they're incredibly easy to use. And they're free. (MySpace can be more of a challenge.) Give it a go on your own before forking over your hard-earned money.

Definitely not busting your chops. I have alot of respect for your work.

I'm on My Space and Facebook. Yes its free and current etc. I'd love to devote hours to this stuff and do see its value. However the only hours I have left in the day are between 1:00am and 6:00am.

I'm not prepared to give up my jobs and family time. Are there people that you could hire. Those services could be written off if you're self-employed.

Twitter can be used anywhere through texting though, which is the beauty of it. It can take a minimal amount of time because of that.

Hermon, as usual, knows the score. Thanks for chiming in, Mr. Mehari.

She thought she was in Kansas. Doh!

Is it possible that some jazz musicians around KC feel that promoting their performances on social networking sites is somehow beneath them? I can see why some people would think that at first glance; most of the self-promotion you see on Facebook et al. is annoying, crass and, worst of all, ineffective.

There's also this romantic notion of the struggling jazz musician, playing to an empty room night after night, for whom time Twittering is time wasted, time that could have been better spent honing his skills. I know it sounds stupid but it's out there.

Anyway, I've shared the bill with KC jazz and hip hop musicians alike and there is no question of who promotes their shows more effectively.

@Anon: There are online tools (apps) that actually allow you to update multiple social sites with a single message. While I respect a lack of time, that's just an excuse when the tools are readily available to help manage all of this.

@Jeremy: Interesting theory. But in a town where jazz patronage is more about maintaining a social graph than it is necessarily about the music (yeah, I'm looking at you, Jazz Ambassadors), it feels like the musicians are totally missing another chance to connect with their audience. You know how time consuming it can be to send a 140 character text message...

@Patchchord you are not busting chops necessarily, but stating the facts of the paradigm...

@everyone As far as promotion goes, some will get it and some won't. Kansas City is a lot better about using the 21st Century tools to promote the music and our scene than many places. This blog is proof of that.

Many of those same older cats idolize legendary artists like Miles Davis. The irony of doing that is it is pretty obvious that Miles was a businessman too and he taught all of his sidemen to be business people also (Herbie, Wayne, Coltrane, Cannonball, Zawinul, Garrett, on and on...) - if he had had Twitter, Facebook and Podcasts in 1959, he'd have used them. The same with Bird...

I don't think that we as a scene promote our scene very objectively in terms of the music. There is a lot of promotion that happens in KC, but much of it is not effective because it is so obviously partisan sometimes that it is hard to swallow as legitimate in the greater context and perspective of jazz as a global entity - most times the music decides who is going to be (or becomes) a "star" not the constant hyping of someone whom the KC media wants to be a "star"... I've been back home since 2001 and it is still a lot of the same people being promoted over and over. The promotion of Diverse has been a refreshing diversion from this practice. Everyone means well, but the primary criticism that I have about Kansas City's jazz scene and community is that we need to wake up - musicians, club owners, promoters, agents, supporters, fans, the union - and get real... something is wrong when professional musicians can not earn a living wage and can not practice the application of their art without having a "day job" or being a "student" or having someone "subsidize" their lifestyle...

We can continue to pursue various individual agendas, form cliques and factions that will further divide the Kansas City Jazz Community - that's easy; OR, we have the opportunity in our lifetimes to work together and do something great for the legitimate perpetuation of the music as a community that is unified.

There are generations of people 35-60, 18-35 and 12-18 who are awakening in all aspects of the music and this fact has been coming for a long time. There is already a new generation of leaders who have the energy, time to devote, talent, expertise and passion, who can offer much to all of us on the scene locally, nationally, and internationally.

That's what made Kansas City significant as a scene from the musical standpoint of things back in the day. Those professionals who ran the unions (34-627) had it together. We need those types of people to step up to the plate again, because that is the type of work that makes genuine history...

As jazz musicians we should all be building a fan base of people that have the where with all to come to a gig, pay the cover, buy dinner and drinks. "Making a fan a friend" and building a loyal group of audience members is as simple as recognizing them, learning their names, sitting down with them on your breaks and making them feel welcome.

There are several "jazz" musicians in town that always have a crowd wherever they play. And they've attracted crowds long before Al Gore invented the internet. It is because they made a fan a friend.

Note: to jazz musicians....spend less time trying to get musicians to come to your gigs and work on the people that can afford to come. Also, if you have beautiful women in the audience, the guys will be there.

I can't belive I'm giving this stuff away. "If they asked me, I could write a book!"

What IF Bird had tweeted?

@Anonymous - good points.
@andrewzender - lol, I knew I was setting someone up...

"...Charlie 'Tweety Bird' Parker was one of the founding fathers of the bebop movement..."

How was my account not on your list? I just did two very successful shows with Rich Wheeler and Jeff Harshbarger marketing with twitter/facebook/email just this last week.

Maybe it was a "show' and I should have been there.