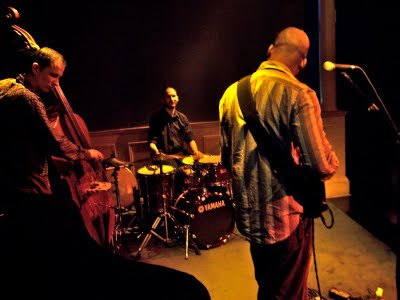 A few of the songs Lionel Loueke performed Thursday at the Blue Room clearly evoked the musician's roots in Benin. Yet they weren't exactly exercises in traditional African roots music. Loueke applied an Auto-Tune-style effect to his vocals. It was funny, surprising and entirely delightful. That's Lionel Loueke in a nutshell.

About fifty people- at least a third of whom were area jazz musicians- witnessed an extraordinary musical dialogue between Loueke, bassist Massimo Biolcati and drummer Ferenc Nemeth.

I told someone at intermission that the intense way Loueke and Nemeth locked eyes for minutes at a time made me slightly uncomfortable. This intimacy, however, allowed the men to interact at an incredibly high level. While their music was serious, the musicians played with a rare sense of humor. Thursday's show was one of the funniest I'd seen all year. Nemeth, in particular, is quite a comedian. He'd occasionally raise his stick as if to bash a drum only to pull back at the last moment.

A trumpet player shot some footage of the show. Suggesting that it's not representative of the trio's performance is misleading. No two selections were alike. General references points in the trio's vast stylistic range included Pat Metheny-style gracefulness, John Scofield-ish funk and a bit of James "Blood" Ulmer-style skronk in addition to the African explorations.

The trio's next gig is in Martinique on December 3. I can't imagine a place I'd rather be that day.

(Original image by Plastic Sax.)
Posted by Happy In Bag at 6:01 PM

Labels: Blue Room, jazz is just not all that popular

I had never even heard of Loueke before I saw him play with Herbie Hancock's Headhunters 2005 here in St. Louis, but I liked what he did in the context of that band - lots of funk riffing, of course, but also more abstract things, and a feature vocal number that had a more African feel. Maybe one of our presenters here in St. Louis will take a shot at booking his trio...

While he doesn't have enormous crossover potential, Dean, I know that more than fifty people in KC would have loved the performance of his trio. Here's hoping they play both Kansas City and St. Louis in 2010.

I found you because I was trying to caption a photo we took of Lionel's band in San Jose. Coincidentally, I use the term Plastic Alto sometimes in homage to both Ornette's instrument and my town of Palo Alto -- Mark Weiss dba Earthwise Productions