The Ten Most Important Jazz-Related Events and Stories of 2009 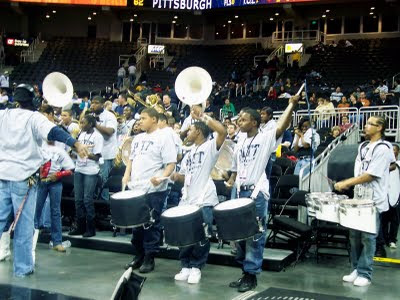 Matt Otto set me straight earlier this month. "I think jazz has never been so strong," the saxophonist asserted in an interview. "Not necessarily from an economic point of view, but due to the sheer number of jazz musicians on the planet that increases year after year." The contentious relationship between art and economics riddles this summary of the state of Kansas City jazz in 2009.

1. Jazzy Home Companion. The weekly 12 O'Clock Jump radio broadcast brought fresh energy to the Mutual Musicians Foundation. It's too soon to know if the program is going to get the syndication sought by its organizers, but even if it fails the experiment is a noble one. (The NPR-centric show was nicknamed by Jason Harper.)

2. No Rhythm. No Ribs. The cancelation of the 2009 edition of the Rhythm and Ribs Festival, Kansas City's premier jazz event, was demoralizing. Adding insult to injury, the festival's site has been hacked.

3. Diverse. The rise of Diverse gives Kansas City music fans an energetic young act to rally around. Musically, Diverse is excellent. But they also "get it." The band's DYI PR model proves that energy and enthusiasm can make good things happen.

4. The Majestic. The closing of The Majestic provided a great deal of hand-wringing. Its re-opening has been the source of cautious optimism. The sometime jazz joint doesn't yet have a dedicated new site, but they do engage customers on Twitter. Our fingers are crossed.

5. Fresh faces. Three notable musicians- Jerry Hahn, Matt Otto and Kim Park- either returned to Kansas City or moved here for the first time. And Dixieland fans must be delighted that Lynn Zimmer is now featured several nights a week at the Gaslight Grill.

7. New media. Some get it. Some are being left behind. Real-time Twitter dispatches from artists, clubs and music fans influence where I spend my dollars at least once a week. Meanwhile, savvy artists make their music accessible to fans. Last week, for instance, Chris Burnett gave fans a free MP3. Diverse boasts a national presence thanks less to radio than to podcasts. Not coincidentally, Burnett and Diverse also understand the power of video. Money is no longer an excuse- I saw an off-brand video camera advertised for $25 on Black Friday.

8. Quiet Saturday afternoons. One of my favorite Kansas City traditions ended this year. Saturday afternoon jazz jams are no more. Jardine's ceased hosting the event several months ago. It has yet to be replaced. And no, Mama Ray's blues-rock jam session at BB's Lawnside BBQ doesn't count.

9. Dwindling audience. I keep hearing about great turn-outs for jazz events, but the majority of high-profile jazz shows I attended at the Folly, the Blue Room and Jardine's were poorly attended. A lot of it is attributable to sad attrition. Vince Bilardo, for instance, was a fixture at almost every jazz event. He died in February. Jazz students aside, I have yet to see evidence of a young jazz audience to replace previous generations.

10. Jazz on film. Decades after it was acquired by the city, portions of The John Baker Film Collection are finally on permanent display at The American Jazz Museum.

good review happy. i started reading your blog this year and it has become my window to the world of local jazz happenings and artists. i don't get out and support the local music scene like i used to, but i'm no less interested. thanks for keeping all of us up-to-date. - mike t.

You make a great point. Sadly, having an internet presence IS more important than being able to, say, play chord changes. Or have a reasonably nice tone and play in tune.

Does it have to be an either/or proposition, Anon 157?

No, it doesn't, as displayed by Diverse.

The making of lists is a tiresome thing and much ado about nothing and reading them even more so. Sorry. Just one CMF's opinion. Happy Holidays!

I like year-end lists! Keep up the good work on behalf of jazz, HiB!

I beg to differ, BGO. Even the most gratuitous lists are fun and revealing. And while I do have a couple admittedly silly endeavors in the works, this exercise- at least for my purposes- will serve as a helpful frame of reference in the years to come.

The most productive, efficient and succesful people that I have come across live by a daily and or weekly to-do list....mostly daily. If you want to take your life to the next level and accomplish all of your goals then lists are where it's at!

As far as making a list of important events, recordings etc goes, that forces you to research your information to back up your opinion.

There is nothing worse (well maybe there is) than people who state facts or voice opinions that are uninformed. (Note to self...get your news from a variety of agendas (and they all have agendas)and sort it out for yourself.

I keep lists. Think about it. What's on them?

I just don't break them down like some folk do except for yes, the daily list, which in my case is long, long, long. So the record (vinyl) of the day is The Ghost Opera, which I probably have the only existing copy left in KC. Tomorrow it will be removed from my list until gawd knows when. And so it goes.

My life is nirvana backwards and I sort of like it that way. Smells like 99 year old flesh to me. Getting old is groovey because you can use that word and misspelt it.

Nixon kept lists too and he and I are both Capicorns but so was Bogie who as far as I know didn't keep lists because he was too busy smoking cigarettes, which killed him early in his life (I smoke like a chimney--see you in hell).

And HIB, do not attach too much self-importance in anything you do. It will bite you back.

When I make a list of the best comments ever posted at this site, your latest missive will be at the top, BGO.

Your final point is well taken. I usually- but not always- remember that I'm writing about music and not about the war in Afghanistan.