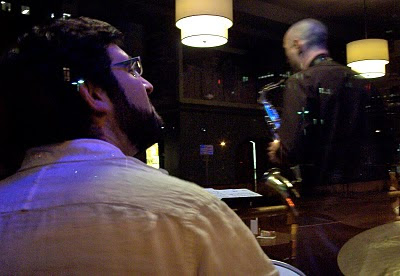 I last raved about Crosscurrent in January. I suggested that they're "fiendishly good" and that they perform "music from a cocktail lounge that specializes in absinthe." And in his preface to a stunning photo essay of Crosscurrent, KCJazzLark called them "one of the best jazz groups in town." He's right.

I caught Crosscurrent last Wednesday at the Power & Light Grill. The establishment's enormous glass windows and concrete floor played cruel tricks on the band's sound. Their interpretation of Lennie Tristano material lost much of its nuance. The sound of saxophonist Matt Otto, one of Kansas City's most significant voices, almost resembled the processed style of David Sanborn. Weird.

Steve Lambert's reeds, T.J. Martley's keyboards, Zach Beeson's bass and Wisman's drums also echoed around the large room. There simply weren't enough bodies to absorb the sound. In the ninety minutes I spent at Power & Light Grill, the audience bottomed at 15 and peaked at 30.

Why were there so few people there? It was like a secret gig. Outside of Otto and Lambert's sites and the members' Facebook accounts, Crosscurrent is invisible on the internet. It's staggering that such brilliant musicians can't bring themselves to provide even a bare minimum of self-promotion. They're heard it from me before- I've addressed the matter privately and publicly with some of the guys. Their music- and Kansas City's jazz audience- deserves much better. 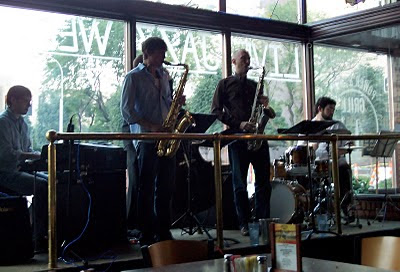 (Original images of Crosscurrent at the Power & Light Grill by Plastic Sax.)
Posted by Happy In Bag at 1:12 PM

Give 'em a break, I say. It's a new venue and it just takes a while to get the word out. Plus, it's sort of a catch-22; in order to play more, they probably should promote themselves. In order to justify the time and money to promote themselves, they have to be gigging as a band a lot. This music is incredibly intricate and requires rehearsal. When you factor in the money for the 3 hour gig (which is probably negligible) and add it to 2 hours of rehearsal plus an hour of traveling/setting up/tearing down, these guys are working for minimum wage. And the difference between 30 people being at the show and 50 is probably several hours of promotion, and then the per-hour rate gets even more ridiculously miniscule. When you consider that their pay is not rising with the number of people through the door...I mean, what's their incentive to do all that extra work? These guys are absurdly hard workers and I imagine are doing this basically as a labor of love to begin with. I'm not speaking for the band here, of course--their attitude may be totally different and I can't speak for them.

It's awesome that the P&L Grill is emerging as a venue for jazz in downtown Kansas City, I think everyone is excited about that and encouraged, but if you're going to question the promotion of this event, the venue itself has some responsibility there as well, in my opinion.

Thanks for the tip - I will check them out at Jardines. In the PSJC, Any chance you can start putting in the starting times for gigs? Such as: "8 pm, Thursday, Sep 2, 2010" Thanks!

I have to agree with the first anonymous. A website isn't going to make the music of Lennie Tristano a draw. Get real.

ericcartman has a point, but for us few diehard jazz fans, we can't go to a gig if we don't know it's happening. Promotion (notification) of gigs doesn't have to take a lot of time or money. I'm on the e-mail gig list of one the players in Crosscurrent and I didn't hear diddley about the P&L gig. I agree with Bill - it was like a secret gig - 'cmon!

I'll reiterate my point this way:

The same venue is hosting a different jazz act tonight. You won't find it listed at the venue's site. It's not posted on their Facebook account either.

so what was the outcome on this one?

Anon 402 makes great points. It's obviously not about the money with Crosscurrent. Still, I believe all performing artists are obligated to use free tools to attract, build and sustain an audience.

I appreciate the suggestion, Anon 524. As a club-goer, I'd also love to have that information. I'd advise you to call the venues directly.

I've been planning a post on this for my blog, kcjazzlark, where I lay out my thoughts (with sarcasm). It should be up sometime this month.