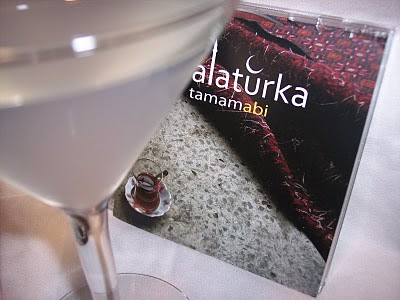 As with most acts of artistic consequence, the live performances and the recorded work of Kansas City's Alaturka offer two entirely different experiences.

I happen to wholeheartedly agree with The Star's assessment of the Turkish jazz quartet's July 25 appearance at Jardine's. Sait Arat's darbuka and Jeff Harshbarger's bass became almost tangibly physical presences in the small room. The night's biggest revelation was the playing of Rich Wheeler. He's received little attention at Plastic Sax, but I now realize that he's one Kansas City's premier saxophonists.

While Wheeler's saxophone dominated the sound field at Jardine's, it's Beau Bledsoe's guitar that shines brightest on Tamam Abi, the band's debut recording. His remarkably light-fingered playing sets the tone. Tamam Abi is a tasteful but never benumbing document.

I was alone the first couple times I played the album. I couldn't imagine any broadminded listener not enjoying the immaculate recording. I was later disabused of that notion. Although it contains a wide variety of moods and melodic hooks, Tamam Abi is capable of repelling conservative advocates of mainstream jazz. Conversely, I've found one listener without any allegiance to jazz who adores it.

Alaturka fits in well with the musical space I already inhabit. New recordings of the Ethiopian jazz of Mulatu Astatke and the Afrobeat of Kansas City's Hearts of Darkness are two of my top picks of 2010. Tamam Abi will almost certainly claim another spot on my year-end top ten list.

---
Additional insights may be gleaned from my Plastic Sax interview with Bledsoe and this performance footage. Alaturka's next performance is August 19 at Crosstown Station.

(Original image by Plastic Sax.)
Posted by Happy In Bag at 11:37 AM

Actually, according to the incredibly handy Plastic Sax Event Calendar, their next performance is August 15th at Jardine's.

If you liked Alaturka, you'll love anouar brahem's "the astounding eyes of rita" the whole Album is excellent: http://www.youtube.com/watch?v=AD1rouZMRaY

actually heard two tunes from the CD on KKFI yesterday afternoon. loved'em! if the rest of the CD is as good, it's a must-have. - mt

Thanks for turning me on to Alaturka! This is very beautiful music indeed. I've always felt that one of jazz music's strengths has its ability to incorporate elements from non-jazz music (popular song, classical, rock, electronic, world, etc.) and, in the process, create something new and exciting. Alaturka is a wonderful example of this.

I've been informed by a representative of the band, KCJazzLark, that Alaturka will not perform at Jardine's in August. They'll return to the club in September. My calendar has been corrected accordingly.

That's a great call, Camille. I'm mildly obsessed with the ECM label so I've heard that excellent album by the Tunisian.

Great to hear, Bob and Mike!

btw, hap... nice photo of the martini glass and cd. (the only distraction is the shadow from the glass.) still, nice work.

I do make an effort, Mike. Thanks for noticing me. (In Eeyore voice.)