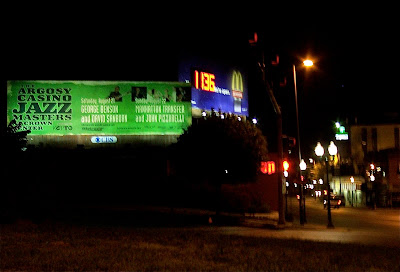 *The Mutual Musicians Foundation is hosting the "2010 Charlie Parker Festival and Memorial Tribute to Edward B. 'Eddie' Baker" on August 29.

*Bobby Watson's long-awaited The Gates BBQ Suite will be self-released on September 14, according to a press release.

*The Majestic finally has an online entertainment calendar. It's viewable as a PDF under the "special events" tab. (Tip via KCJazzLark.)

*The Dead Kenny G's played to one of the largest audiences any jazz band has enjoyed in Kansas City all year at The Uptown Theater on Tuesday. Here's a review. The band is at the Czar Bar tonight, August 11.

*Bob Brookmeyer is interviewed by a journalist in Rhode Island.

*Jazz fans will have tough decisions to make on September 11. In addition to the Prairie Village Jazz Festival and the Wynard Harper Sextet's gig at The Blue Room, it's the date of the 2010 edition of the Crossroads Music Fest. Diverse, Hearts of Darkness and Mark Lowrey are among the jazz-related artists scheduled to perform. Here's Wayward Blog's notice.

*Analogue Sounds of Salina, Kansas, is one of the subjects of a New York Times article about jazz reissues on vinyl.

*The Star offers a remembrance of Ruth Rhoden.