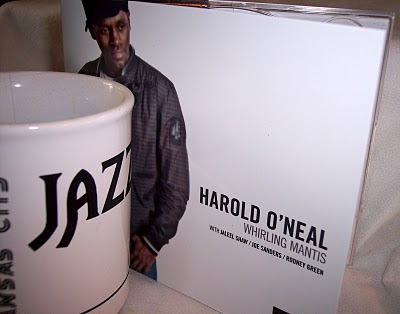 Whirling Mantis, the new release by pianist Harold O'Neal, has served as my default background music for the past two weeks. It's provided my soundtrack as I've trudged on a treadmill, prepared meals and read newspapers. Even my associates who ordinarily claim to detest jazz have been drawn in by Whirling Mantis' obvious charms and immediate accessibility.

I first raved about O'Neal, 29, at Plastic Sax three years ago. He was born in Africa and raised in Kansas City. He's recorded with Greg Osby, Bobby Watson and Ahmad Alaadeen. He currently resides in New York. Whirling Mantis was recorded in Brooklyn in 2008.

Listening to the album is akin to overhearing an erudite discussion between O'Neal and alto saxophonist Jaleel Shaw as bassist Joe Sanders and drummer Rodney Green whisper thoughtful commentary. Both O'Neal and Shaw pose their intriguing arguments with charm and finesse.

My sole complaint with Whirling Mantis could be a personal problem. Perhaps I've been listening to too many albums on the ECM label or maybe I'm overly accustomed to Jon Brion productions, but I just don't care for the way O'Neal's piano was recorded. It's a minor concern about an otherwise entirely delightful album.