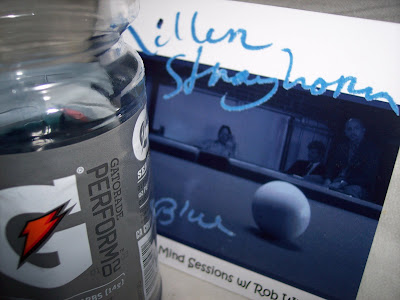 Butterflies no bigger than dimes fluttered in my face as I lay in the grass when the Prairie Village Jazz Festival commenced on September 11. Warm sunshine and a cool breeze gave the perfect day a southern California feel. Similarly, the poised performance by Killer Strayhorn was more akin to the west coast jazz associated with Chet Baker and Gerry Mulligan than the bluesy fire of Kansas City jazz.

80/20 Blue, the Kansas City-area ensemble's second album, mirrors that tried and true approach. A head is followed by a round of solos on most of the twelve tracks. Familiar but impeccable, the album is a sophisticated blowing session. The contributions of Bob Harvey (trumpet and flugelhorn) and James Isaac (saxophone and flute) are particularly noteworthy. Only "Damage Control" and "A Mile In Yo' Shoes pts. I-IV," tracks with arrangements that deviate from the standard pattern, stand out.

Then again, perhaps context is everything. 80/20 Blue may not rank among my favorite albums of 2010, but Chris Lewis' piano solo on Pat Metheny's "Timeline" goes down perfectly while sipping coffee on a Sunday morning. The insistent groove of"Whits-Up?" works well while tossing meat on a grill. And when tiny butterflies are around? Forget about it!

(Original image by Plastic Sax.)
Posted by Happy In Bag at 11:34 AM