Sitting In On the JCCC Jazz Series 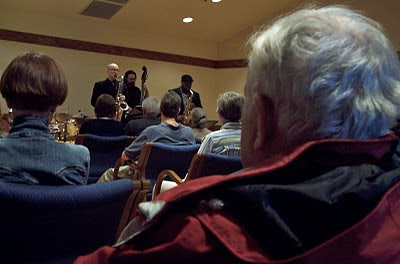 Anyone who thinks that old folks can't move quickly should have seen how briskly dozens of senior citizens sprung to their feet at the conclusion of the Steve Rigazzi Trio's set last week at Johnson County Community College.

The trio was rewarded with a hearty standing ovation after performing an hour of solid melodic swing on October 12. Although I was a quarter-century younger than most of the 100 people in attendance, I had no trouble admiring the old-school playing of bassist Rigazzi, drummer Ray DeMarchi and pianist Paul Smith.

While Smith's reassuring work was the clear audience favorite, DeMarchi's jittery accompaniment on an oddly upbeat rendition of "'Round Midnight" thrilled me. A nasty unaccompanied four-minute bass solo that evoked Charles Mingus may have unsettled some in the audience but it served to remind me that Rigazzi merits consideration alongside Bob Bowman and Gerald Spaits in any serious discussion of Kansas City's elite straight-ahead jazz bassists. Kim Sivils, Rigazzi's regular musical partner, replaced Smith for one number. Her lyrical touch offered fascinating contrast to Smith's more assertive playing.

The free noontime concert was part of the Ruel Joyce Series. I've been aware of the series for some time, but it took an appearance by Matt Otto's quartet on October 5 to first attract me to one of its events. The Otto-led combo of Gerald Dunn, Jeff Harshbarger and Mike Warren is one of the premier groups in the region, if not the world.

Their adventurous set didn't disappoint me, although the unflaggingly polite capacity audience didn't even consider offering them a standing ovation. Even so, I felt guilty about claiming a spot that would have otherwise gone to another jazz fan. I sense that the Ruel Joyce series represents the sole opportunity for many people to hear live jazz.

Besides, after witnessing both their passion and quick reflexes, I'm now reluctant to antagonize elderly jazz fans.

(Original image by Plastic Sax.)
Posted by Happy In Bag at 8:35 AM