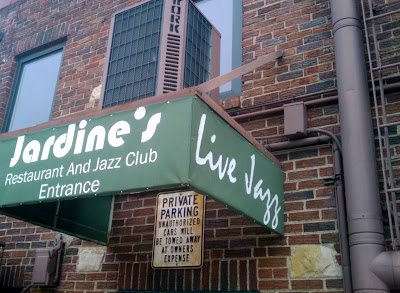 Enough already! I lost the taste for the biggest music-related story in Kansas City on Thursday after calling Jardine's and chatting with Beena (seen here in 2010) about the rumors that were already lighting up the internet. The difficult and complicated situation seems to elicit the worst traits of otherwise decent people. Here's a list of related links:

*A television reporter filed a story.

*A former employee created a Help the Jardine's 15 Have a Merry Christmas Facebook group.

*The Star reports that the Terpsichore installation in the garage at the Kauffman Center made its official debut last week. It contains a contribution from Bobby Watson.

*Pat Metheny's What's It All About received a Grammy nomination in the Best New Age Album category and Karrin Allyson's 'Round Midnight is up for Best Jazz Vocal Album. Here's the complete list of nominees.

*Brad Cox is interviewed by The Pitch.

*Leah Sproul Pulatie is interviewed at the site of the Black House Improvisors' Collective.

*A new version of the Charlie Parker-inspired Super Sax concept has sprung up in New Mexico.

*Joe Klopus reports that an injury will prevent Kevin Mahogany from performing with The Kansas City Jazz Orchestra this weekend.

*Tweet o' the Week: KCTrumpeter- Defending @paynic to no end on FB! Trying to understand him and myself at the same time. #mfconpn

*From KTWU via Sue Vicory: The documentary Kansas City Jazz & Blues: Past, Present & Future will be aired on January 1, 2012 at 4:55pm. It is repeating on our digital channel 11.3 (KTWU Enhance) on Friday, January 6th at 7pm.

(Original image by Plastic Sax.)
Posted by Happy In Bag at 7:26 AM

Yes. He and I don't always see things the same way, but his blog is consistently excellent.

Can you give us any indication of why this is "complicated"? She won't speak on the record to anyone, but feels free to pass along unfounded rumors to anyone she feels might be sympathetic. There are 15 unemployed people who were fired without notice and are owed money who would love to hear her side of the story, but she refuses to tell it. I know they would all love to hear how she is defending herself and have an opportunity to respond.

I don't know how this will play out. I don't even pretend to know what the best possible resolution looks like.

I've quit a few jobs and I've also worked for many failed employers. Stuff happens. It's never pleasant and it's often downright ugly.

Offering assistance to unemployed people is the right thing to do. Vilifying managers and/or ownership is a loser's game.

I absolutely am not out to vilify her. I left out all of the allegations behind the cause of this behavior. I do think that it is very telling that Dave Stephens just posted on Facebook that she stopped payment on the check he recieved for his show there in November. I am not trying to vilify her, but I don't think that covering for her any longer is doing any good to her, the servers, or the jazz community as a whole. I respect your desire to remain impartial and respect all you do for Jazz in Kansas City. I just don't know how much room is left for impartiality in this case.

(feel free not to approve this comment. I am not trying to fight a battle on your blog and really do appreciate everything you do. I am a fan of your blog and a supporter of the jazz community. I just think that sometimes we need to police our own)

You've handled things relatively well, Tips. It's the extreme bashing being done by others that's disappointed me.

I will not publish defamatory comments. Here's an edited version of a comment made at 3:03 a.m. this morning:

Defending Nicholas Payton for speaking his mind and making an impulsive, weak argument for what are otherwise true statements is despicable...

Defending a (_) of a club that is of reasonable importance to the survival of a vibrant artistic community, well that's ok I guess. I guess there's no responsibility that should be expected from that position.

It's not vilifying all management. There happen to be a couple really genuine, good natured club owners in town. (_ ) not one.