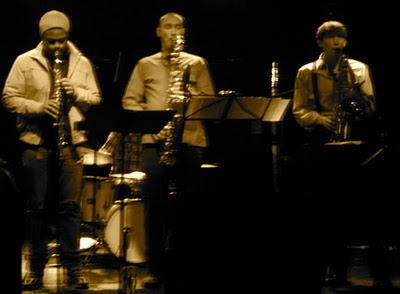 The latest on Jardine's:

*Hearne Christopher confirms that Jardine's has reopened. He also wrote updates about the status of the jazz club here and here.

*A former Jardine's employee suggests that she was assaulted by her employer.

*A television news program covered a benefit for the "Jardine's 15." (Tip via Tony's Kansas City.)

*I'm unable to authoritatively verify troubling reports about the status of 1911 Main.

*From Doug Talley: This Friday, Dec. 16, 7:00-10:00pm, will be your last chance to hear Doug Talley and Rod Fleeman at Cafe Augusta which will be closing their doors at the end of the month. Join us for one final evening of good music and food!

*The Nutcracker and the Mouse King, the new album by The People's Liberation Big Band, is available now. The ensemble appears with the Owen/Cox Dance Ensemble of the ballet's current run at the H&R Block City Stage Theater in Union Station.

*Myra Taylor is remembered by KCJazzLark.

*A residential renovation project in the Jazz District has commenced.

*The new blog of the American Jazz Museum features an interview with Danny Embrey.

*Chuck Berg reviewed a concert in Topeka by Sara Gazarek and Josh Nelson.

*Tweet o' the Week- clintashlock: I think if someone asked me to explain joy, I'd play them a recording of a Stevie Wonder harmonica solo.

*From an American Jazz Museum press release about the MCC-Penn Valley 18th & Vine Jazz Festival: Presented in partnership with MCC-Penn Valley, this festival is a non-competitive event providing middle school, high school and collegiate level students with an opportunity for increased experience and understanding of American jazz. All participating students will have opportunities to interact with internationally acclaimed jazz artists, local professional jazz musicians and distinguished educators as well as perform in two of the American Jazz Museum’s world renowned venues – the historic Gem Theater and the Blue Room jazz club.

*From UMKC's Conservatory of Music: …In March 2012, Kansas City brings to Le Poisson Rouge in New York a concert entitled "Crossroads": an eclectic mix of people and cultures, including composers Paul Rudy, winner of a 2010 Rome Prize fellowship; Guggenheim fellow James Mobberley; Chen Yi, winner of the Charles Ives Living Award from the American Academy of Arts and Sciences; NYC’s own John Corigliano, winner of the Pulitzer Prize and Barr Laureate Composer at UMKC in 2012-14; the music of Kevin Oldham and John Kander as sung by internationally acclaimed tenor and UMKC Professor Vinson Cole; and the New York City premiere of excerpts from Zhou Long's new opera "Madame White Snake," winner of the 2011 Pulitzer Prize in Music. (Via Steve Paul.)

(Original image of Logan Richardson, Matt Otto and Steve Lambert performing at Micah Herman's album release show at the RecordBar on December 11 by Plastic Sax.)
Posted by Happy In Bag at 7:47 AM

How about commenting on the Kansas City Jazz Orchestra and concert? There must have been 1200 people Friday night at Unity. This was a big event. It warrants coverage.

I'd love to link to a review of that concert, Anon 11:11. Alas, not even the lowliest blogger posted anything about it.

It was a great concert. Sold out show. If the KCJO looked more like "Occupy Wall Street" protesters they might get someone to blog about them.

The KCJO musicians are top shelf players. Several are innovators and all of them can shift from European Classical music to Jazz in a measures notice or a Moment's Notice as the case may be.