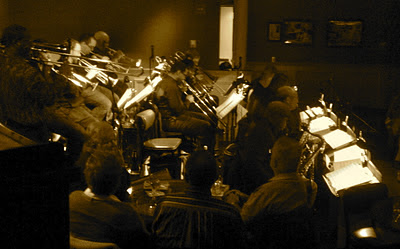 "Don't look any further," Louis Neal said as he introduced an interpretation of the Dennis Edwards hit during a November gig at the Blue Room. "You're listening to the best big band in Kansas City."

Although I'm affiliated with another of Kansas City's big bands, I didn't even consider raising an objection. I loved hearing what many of the region's best musicians- Clint Ashlock, Gerald Dunn, Charles Perkins and Charles Williams among them- did under Neal's direction during a sleek arrangement of the dusty R&B song.

Each of these aggregations has a different sensibility. I can't claim that everything the ensembles perform is entirely fresh, but the recent work of the late Bob Brookmeyer and the influence of acts like Radiohead are welcome reminders that the big band repertoire continues to evolve. Besides, nothing else provides the visceral thrill that can only be produced by a big band.

(Original image of the Louis Neal Big Band at the Blue Room by Plastic Sax.)
Posted by Happy In Bag at 9:48 AM

I know myself and fellow band mates are extremely excited for this.

Thanks for the tip, Matt. I'm excited!