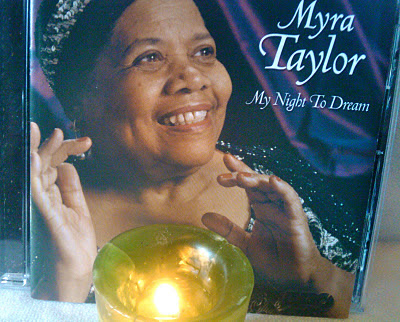 When Plastic Sax was founded in 2007, Myra Taylor was one of this site's initial subjects. How could it be otherwise? With her outsized personality, active performance schedule and ties to Kansas City's illustrious past, Taylor was among the region's most prominent acts.

Taylor died Friday. Tim Finn wrote a thorough obituary. KCUR offers an invaluable report. A television bulletin suggests that "Taylor was considered the last living legend of the great age of Kansas City jazz." A press release from the American Jazz Museum noted that Taylor was a recipient of the institution's Lifetime Achievement Award.

Although it lacks the vigor of old tracks like "Take It Easy, Greasy", I stand by my assertion that Taylor's late-career album My Night To Dream ranks among the Top Ten Kansas City Jazz Recordings.

Taylor's status may have been appreciated by music historians and nerdy jazz bloggers, but she never achieved true celebrity status. This video encapsulates the public's indifference to Taylor's legend. And I'll confess that even I eventually tired of Taylor's schtick.

What I wouldn't give to experience it just one more time.