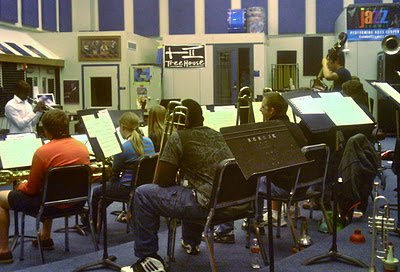 *Mark Edelman lobbies for a truce.

*Charles Ferruzza has a fresh perspective.

*Yael Abouhalkah editorializes about the turmoil among "the small world of KC jazz enthusiasts."

*Tony Botello suggests that a notable trend was overlooked in Plastic Sax's year-end survey. He has a point.

*A six-minute video lists January's events at The American Jazz Museum. (I believe this is the same video that will run during breaks at the Blue Room.)

*An appearance by Bobby Watson is mentioned in an recap of the year in jazz in Ireland.

(Original image of high school jazz students at Kansas City Kansas Community College by Plastic Sax.)
Posted by Happy In Bag at 9:09 AM

I believe the group is called the Kansas City High School All Star Jazz Ensemble.