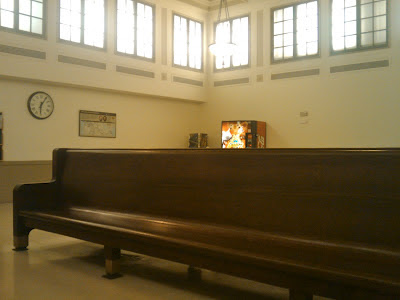 *Here are words I never expected to type: Listen to Roy Hargrove's solo on a song by Kansas City hip hop artist Reach. It was recorded last weekend at a jam session at YJ's. Hargrove isn't visible in a video clip of the unlikely event. And here's footage of Hargrove jamming with Hermon Mehari at the Foundation.

*Take Five Coffee + Bar is featured in an article about the arts in Johnson County.

*An awful chapter in Kansas City's history is recounted by Robert Trussell. The story about a 1945 incident was first published in 1988.

*The University of Kansas' annual jazz festival takes place March 2-3. It will feature Donny McCaslin and Alex Sipiagin. Follow the links from here.

*Additional images from Jazz Winterlude are posted by KCJazzLark.

*Gamelans figure in the future of Black House Improvisors' Collective.

*From Dan Gailey: -The University of Kansas School of Music and Hall Center for the Humanities are co-presenting pianist Randy Klein's Two Duos in concert on Saturday, February 11, at 7:30 p.m. in Swarthout Recital Hall. Admission is free. Klein is the 2011-12 Hall Center Simons Public Humanities Fellow and will be in residence at the University of Kansas for most of February. The February 11 concert will also feature trombonist Chris Washburne and saxophonist Ole Mathesin.

(Original image by Plastic Sax.)
Posted by Happy In Bag at 6:55 AM

The MMF should institute a no talking policy. I guess its hard to inforce when people are stinkin' drunk. Imagine the poor soul that would have to enforce the policy.

The silence enforcer position at MMF would probably resemble that of Spinal Tap drummer.

Listen to any of the Bill Evans' Trio live records (especially the 1960 Birdland Sessions). Those audience members weren't exactly whispering behind the performance of arguably one the greatest piano trios ever. I'm not saying I don't despise the noise too, but it certainly isn't a recent epidemic.

Jazz in the Concert Hall eliminates that...except for Keith Jarret.

People need to chill the f out about people talking during gigs. If you're a musician and you can't handle people conversing, you're pretty self-indulgent. If you're a listener and feel interrupted, scoot a little closer and pay more attention. Music is for everyone.

Thanks for your scholarly contribution. Spoken like a true professor and gentleman who doesn't mind playing for free.
Well done sir.

There has been a no talking policy at Birdland for at least two decades.

Hey Danno, thanks for posting such an insightful reply. Apparently you know where to find me. Come on out.

And hey, if you'd like to take a look at my tax info, you'll see how much I actually play for free. Danno.

I actually believe that Clint is not playing for free (I can only assume that you are talking about NJO's REHEARSALS at Harlings) - as far as I can see Clint has negotiated a rehearsal space for free. I am not sure about other folks but I cannot imagine it is very easy to fit a big band into your basement to rehearse. From what I heard Clint did negotiate pay for the ensemble at 1911 Main (but that club closed down almost as quickly as it opened). Furthermore the public rehearsal space allows the leader and band members to network and, hopefully, gain a following that will come to enjoy them at other venues. As I have witnessed Harlings also allows him to sell his CD, from which I assume he makes some money. From what I observe Clint has found a way to rehearse a large ensemble and create a following for the ensemble at the same time he is helping to preserve and promote the big band legacy including playing the music of KC's own Count Basie. Maybe you should open a club (there are some vacancies in KC at the moment) and provide an opportunity for large ensembles to enjoy the luxury of a paid rehearsal...in other words (pardon the pun) book 'em Danno.