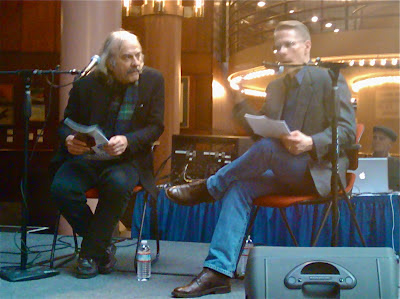 "I think jazz is the most beautiful music when it's good," Enrico Rava said in an interview before his concert Saturday at the Portland Jazz Festival. "When it's not good, it's the most horrible thing in the world."

Sometimes I wonder why I allow jazz to be such a major component of my life. There's not much money in it. My passion for the music isolates me from most of my friends and family. And I love other genres, so I don't really "need" jazz.

Yet it's not true. That's why this Kansan traveled 1,800 miles to attend Rava's concert. Hearing Rava didn't just affirm my commitment to jazz- the experience overwhelmed me with gratitude for having the good fortune to take in such insightful brilliance.

I laughed out loud throughout Rava's 95-minute performance. Rava- like European ECM-affiliated artists Jan Garbarek and Terje Rypdal- is someone I never thought I'd get a chance to see. (I was devastated when Dave Holland canceled his appearance in Kansas City last year.) So aside from concerts by Pat Metheny, I rarely get an opportunity to discover how the ECM sound works in a live environment. It turns out that the translation from a Manfred Eicher studio production to the stage isn't insurmountable.

The dramatic dynamics of Rava's band Tribe were hilarious. Rava frequently deferred to young trombonist Gianluca Petrella. The bandleader clearly believes Petrella can do no wrong. He's right. The aggressive trombonist is redefining the instrument. Pianist Giovanni Guidi, on the other hand, seemed regularly incur Rava's wrath. Unlike Rava, I liked almost every one of his ideas. Bassist Gabriele Evangelista is just a kid, but drummer Fabrizio Sferra managed to keep everyone together. He's fantastic. And Rava? He plays like the logical extension of Bix Beiderbecke and Miles Davis. Genius.

The sheer audacity of the concert gave me another reason to keep smiling. Rava and his band felt no obligation to swing. While the quintet frequently referenced Dixieland, the Count Basie Orchestra of the '30s and early bop, these acknowledgements served to offer context for the sound of 2012. Nothing- not Die Antwoord, Crystal Castles or the Weeknd- is more relevant than the music Rava played Saturday. Incredibly, only about ten people in the capacity audience of 300 at the gorgeous and acoustically perfect Dolores Winningstad Theatre walked out during Rava's performance.

I had a feeling I wasn't in Kansas (City) any more.

"Sometimes I wonder why I allow jazz to be such a major component of my life. There's not much money in it. My passion for the music isolates me from most of my friends and family. And I love other genres, so I don't really "need" jazz."

I love hearing about how much you sacrifice for jazz, with your wife, kids and job with the KC Star.

Try dedicating your life to playing it rather than criticizing it from a proudly un-learned point of view. THEN talk to us about sacrifice. Jesus.

It might be better if Anonymous 1:59 would reveal who he/she is so we could understand how proudly learned one truly is.

Hey Anonymous, it's shit-fits like this that make me hate players like you. "I'm so much better than you cause I live this shit man" waaaaahh-waaaah, give me a fucking break. Do you have some sort of exclusive contract or something?

All Happy is trying to do is evangelize and help other people get hip to the music which you so obviously love. He even says straight up on his title page "I'm a jazz lover; I don't pretend to be the ultimate jazz authority."

So why don't you get down off your horse and cut the guy some slack. At least he's trying, which is more than most of the lazy fuckers in this town.

And regarding your "un-learned" comment, the man appreciates everything from Lester Bowie to Phil Woods, so I think he's entitled to his taste.

How much of your disposable income do you spend going 1500-5000 miles out of the way to support the artists you love?

And, Bill, I know you can take care of yourself, but sometimes I just get steamed.

Thanks for rising to my defense. I don't care for Anon 159's tone either, but I understand his/her point. Compared to musicians who are dedicating their lives to jazz, I'm a mere dilettante.

What a great concert that must have been. Portland is such a hip city!! The ECM sound translates well in a live setting. Had the opportunity to study with Dave Holland, Julian Priester, Smitty Smith and Kenny Wheeler when Dave had his quintet. Check out the Seeds of Time album and his ECM releases in the mid 80's.

Go back and hang out with your buddies at "Occupy Kansas City."

Work on your jazz language and clean up your english language.

What are we in junior high?

Thanks for such a flattering insult! While your concern for my grammatical prowess is laudable, I would suggest you go back and check your punctuation. Commas and prepositions can be such nasty things!

Good try with the "guilt by association" card, but I am not ashamed of caring about citizens' right's in this country, even yours. Alas, this is not the place for such a discussion. Why are you so interested in my political inclination anyway?

As for your other tip, I think I will go work on my #BAM language. Do you have any pearls of wisdom you would care to share?

Hap... bet you didn't expect THIS kind of discourse when you posted this! - mt

Lucky guess on the Occupy comment!
Who says you can't judge a book by its cover.

Phono, you might put a few bucks away every year for your golden years....its called taking personal responsibilty. Is that too much to ask? Oh, I guess than you would be a share holder in a company.

I'm all for citizens rights. Hard working, dedicated, diligent individuals who are on a quest to better themselves and their community. You included.

I think he meant the swearing Hunter.

I'm usually only good for one retort, but feel the need to correct anon 1256's misperception and not bring an innocent man's name into this. I am not Hunter.

You don't like the scatological vocabulary? My mistake, maybe I should use a different species of feces next time, perhaps a more cultivated bovine excretion?

My concern is largely with the People's United decision. Money is not speech. Such a broad brush we can use to judge each other. You don't know me from Adam, and I dont know you, so lets leave it at we're probably not voting for the same person, for radically different reasons. Thanks for the time of day.

Whoa! Don't bring me into this! Has everyone been thinking Phonologotron is me all this time?