The Ghost of a Jazz Club Past 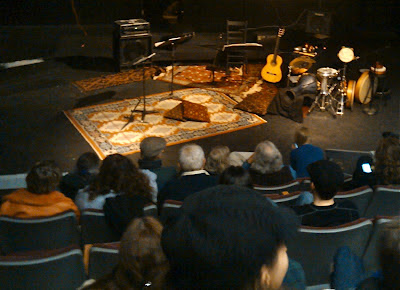 "When I got the idea for this concept," Brandon Draper explained before Alaturka's performance. "This is what I had in mind."

Draper said that the ensemble's monthly gig at Jardine's had been a staple of Alaturka's schedule. The new Grassoots Concert Series was partly inspired as a response to that loss. The gambit seems to be working. A full house of over 75 paid $10 and $15 each for the performance.

Because I've written extensively about Alaturka at Plastic Sax and elsewhere I'll simply suggest that its performance was no less exceptional than usual. Beau Bledsoe, Draper, Rich Wheeler and 2011 Plastic Sax Person of the Year Jeff Harshbarger are four of Kansas City's premier musicians. Tamam Abi was my fourth favorite "jazz" album of 2010. I also interviewed Alaturka founder Beau Bledsoe a couple years ago.

The performance space at 7933 Main Street features bleacher-style seating, fine acoustics and a family atmosphere. Rather than being nuisances, the children on hand Friday were among the most attentive and enthusiastic members of the audience. The sole distractions were occasional ambient noises from the halls of the school and a piercing light above the venue's main entrance.

A question-and-answer segment- often a dubious proposition- was excellent. Harshbarger and Wheeler are remarkably adept at articulating complex ideas.

Sure, I miss Jardine's. I like Beena, the club's owner. And I enjoy adult beverages. Even so, from an obsessive music fan's perspective, the performance space at Kansas City Academy represents an upgrade.

(Original pre-show image by Plastic Sax.)
Posted by Happy In Bag at 12:43 PM

You can't compare a club venue with a concert venue, apples and oranges. Both have their place.