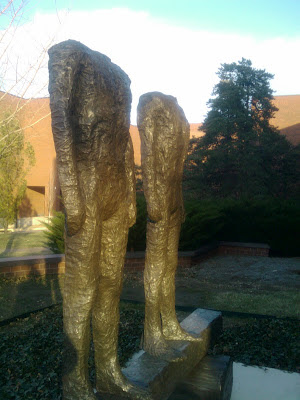 *An essay published by The Atlantic is titled "The Jazz District Authenticity Problem."

*Hearne Christopher reports on possible progress at the location once occupied by Jardine's.

*Behind the Music: Jazz Discharge.

*Diverse appeared on a morning news broadcast on Fat Tuesday.

*Chuck Berg reviewed a concert by Tim Doherty's Nine + One.

*The 2012-13 season of the Harriman-Jewell Series includes a Bobby McFerrin concert.

*A blogger posted a photo of Fat Tuesday's parade. (Via Tony's Kansas City.)

*Comment o' the Week: Anonymous- … I love hearing about how much you sacrifice for jazz, with your wife, kids and job with the KC Star. Try dedicating your life to playing it rather than criticizing it from a proudly un-learned point of view. THEN talk to us about sacrifice. Jesus.

*From JCCC: Students and faculty from the Music and Theatre Department at Johnson County Community College will perform several concerts in March. The concerts are free and open to the public. All of them will take place at 7:30 p.m. in the Carlsen Center in Polsky Theatre... March 7 –JCCC Jazz Night will feature the "For Musicians Only" Community Jazz Ensemble, which is the special guest for the concert; the JCCC Midnight Blues Jazz Choir and the JCCC Midnight Express Jazz Ensemble. A wide variety of jazz styles will be performed.

*From Take Five Coffee: Introducing Take Five Second Set: Saturday night we have Brandon Draper's jazz quartet in our usual time slot, but it will be followed by Miles Bonny in the first ever Take Five Second Set. Saturday, February 25. 11pm Miles played music for Take Five's grand opening back in 2010. We are elated to have him back to host the first of an occasional series of Second Set shows. We're going to open up the room for a 21-and-over crowd and keep the coffee and martinis and the music flowing until 2 in the morning. Brandon Draper is going to stick around and join Miles in this inaugural Take Five event. Bonny's "second set" is scheduled to begin at 11 p.m.

Deborah Brown is "celebrating Ella" at The Blue Room March 3rd. Looking forward to a spellbinding performance from one of the world's best jazz divas today in honor of yesterday's best!

Thanks for the tip, Grace.