Review: Grace Kelly and Phil Woods at The Folly Theater 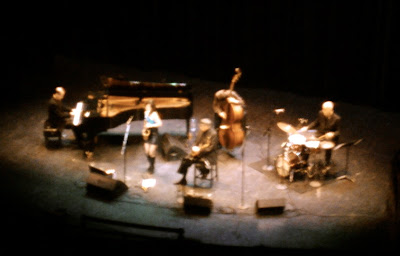 "You even get to see Charlie Parker's plastic saxophone," Grace Kelly ad-libbed as she sang about the attraction at the American Jazz Museum during an appealing rendition of "Bye, Bye, Blackbird" Saturday at the Gem Theater.

The 19-year-old has progressed nicely since her tedious 2009 appearance at The Blue Room. (Here are my notes on that performance.) Kelly only occasionally bored me Saturday. Her best feature was a pop-flavored ditty in the vein of Erin Bode.

Several dozen jazz musicians in Kansas City are capable of playing and singing circles around Kelly. But that's not really the point. I can think of only two or three teenagers in the area with better chops than Kelly. And none possess Kelly's charm. Most in the audience of about 375 seemed smitten by her showmanship.

In any case, I didn't lay down $18 for Kelly. I wanted to see Phil Woods one last time. The legend didn't disappoint. His beautiful solo during "People Time" brought tears to my eyes. Even better were pure throwback renditions of "How High the Moon" and "Webb City." The bop classics were rendered as if the past 65 years never happened. I'm not ordinarily inclined to admire exercises in nostalgia, but Woods, an 80-year-old Parker acolyte (he even married Parker's widow Chan!), has earned the right to revisit his youth.

Thanks for everything, Mr. Woods.

(Stunning original image by Plastic Sax.)
Posted by Happy In Bag at 4:29 PM