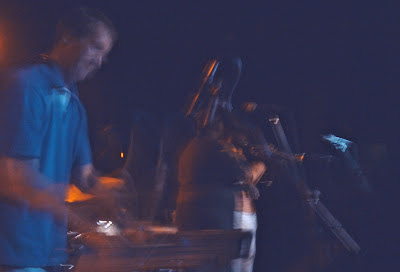 If surprise is one of the most treasured qualities of jazz, why are so many performances by jazz musicians entirely predictable?  I've heard many of the same men and women play precisely the same solos on the same material with the same accompanists for twenty years.  Advocates of these artists presumably appreciate their constancy.  Others, myself included, think this mentality is stale.

That's just one reason many members of the new wave of jazz musicians working in Kansas City is so refreshing.  On Saturday, for instance, Diverse performed at the Riot Room as part of the annual Pitch Music Showcase.  Rather than offering a straight jazz set, Hermon Mehari, Dominique Sanders, Brad Williams, Peter Schlamb and Matt Villinger backed Reach in an invigorating groove-based, rap-themed show.

One could easily argue that the atypical lineup and the emphasis on hip hop disqualified the outing as a "jazz" performance and even as a "Diverse" performance. A conventional jazz purist attending attending Saturday's showcase expecting to hear Mehari's updates on Clifford Brown material would undoubtedly have been furious.  Yet Mehari had advised his Facebook followers earlier in the day of the content of the gig.

The incorporation of elements of hip hop, obviously, isn't necessary to make jazz interesting.  A great soloist- Kansas City's Bobby Watson comes immediately to mind- could find an infinite number of intriguing ways to play familiar standards.  And plenty of forward-thinking musicians ranging from the members of the People's Liberation Big Band to Pat Metheny are notoriously loathe to repeat themselves.

I hope that the risks regularly taken by the members of Diverse and by peers including fellow Pitch Music Showcase artist Mark Lowrey remind the entirety of the regional jazz community that improvisation shouldn't necessarily be limited to solos played on the bandstand.

(Original image of "Diverse" playing "jazz" at the Riot Room by "Plastic Sax.")
Posted by Happy In Bag at 7:17 PM

Name some names of the people playing the exact same solos night after night year after year.

I've heard those same people for the last 30 years and although they may be playing similar repertoire I can guarantee you they are not playing the same solos note for note. That is why I ask you to name one name.

Yes, Basie's band members played similar and exact solos night after night on the hits of the band. Lil Darlin, One O Clock Jump and a few others but thats what the public wanted.

If things are so predictable by these artists than see if you can guess the next set list and sing along with the solos note for note.

You are correct, the old "mentality is stale" but only to ears that are not sophisticated enough to hear the subtleties.

Happy, your taste is so much better than the strawman's.

Grab Ted Geioia's The Jazz Standards for future reading. He nails it and then some.