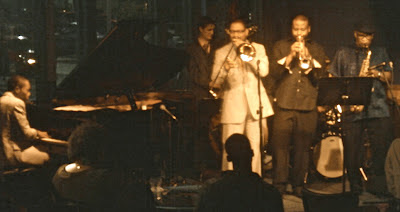 *Delfeayo Marsalis' appearance at the Blue Room was reviewed by The Kansas City Star.

*Music recorded at a recent performance by the Black House Improvisors' Collective is available at its site.

*I asked Hermon Mehari about "Full Circle," a track from the forthcoming Diverse album that's also available on the free 41-track Midwestern Audio compilation.  He told me that it's "(i)nspired musically by me playing in more gospel music situations and conceptually by the general idea of many things in life seeming to come 'full circle' if we look at these ideas and situations in the right away."

*Joyce Smith reports on the food and drink menu of the Kill Devil Club.

*Weedstock, the successor to Jazz In the Weeds, takes place on October 6.  The music of each of the participating acts- Mistura Fina, Passport, Black Tie Billie and the Blues Notions- includes elements of jazz.

*The Oklahoma Jazz Hall of Fame in Tulsa is in financial jeopardy.

*Comment o' the Week: Dr. John- Wynton, Branford you guys sound like your much less successful brother - Delfeayo, for real. - You keep proselytizing to the masses who by and large do not care for your obsolete takes on "What Music is", "What Jazz is." Please try and keep on topic. I think the review was spot on. Yes there are some intonation problems but the record does capture the extreme energy of a HOD performance and is an accurate portrayal of what the band is all about. There are some killin' moments on this disc, most have to do with a very talented rhythm section that is only gong to get better.

*Tweet o' the Week: CharleyinKC- I just had a drink at the Kill Devil Club in P&L. I think they're still trying to figure themelves out, but when they do it could be cool.

(Original image taken at the Blue Room on September 21 by Plastic Sax.  From left to right- Richard Johnson, Jeremy Boettcher, Delfeayo Marsalis, Sean Jones and Bobby Watson.)
Posted by Happy In Bag at 11:43 AM

glad you're still keepin' plastic sax goin', bill. only way i know to keep informed, educated. thanks for continuing to bring this to us. - mike t.