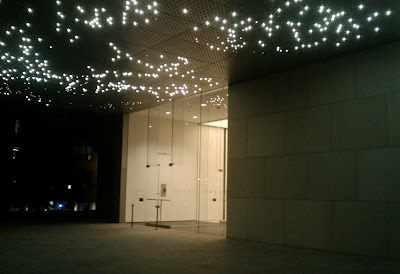 *The Orchestrion Project, a documentary about Pat Metheny's ambitious automated concept, hits movie theaters in fifteen states on Thursday, October 3.  No showings are scheduled in Kansas or Missouri.  Metheny is also interviewed by USA Today.

*The ongoing success of the Kansas City Jazz Orchestra is admired by KCJazzLark.

*Diverse will be among the performers at the opening reception for Prairie Logic on Friday, October 5.  The band is scheduled to perform at 7 p.m. at "Kansas City's newest public art project and performance venue."

*Our Path to This Moment: the Rob Scheps Big Band Plays the Music of Ezra Weiss with Special Guest Greg Gisbert was released last month.  Scheps performs frequently in the Kansas City area.

*The Phoenix was a jazz club for much of its 22-year existence.  The 2012 Phoenix Fest on Saturday, October 6, features four rock bands, one blues band, an R&B act and two jazz-oriented acts that perform material by the likes of Gloria Gaynor and Bill Withers.

*The opening reception for the American Jazz Museum's Beyond Words: A Fusion of Poetry, Visual Art & Jazz is Friday, October 5, 2012, from 6-9 pm.

*I wish an animated video I made in 2010 was no longer applicable.

*Saturday's concert by Gary Burton, Chick Corea and the Harlem String Quartet was reviewed by The Kansas City Star.

*Tweet o' the Week: ChrisHazeltonB3- The concert I saw last Friday was amazing! I think @BenFolds Five should hire me to play B-3 for the rest of the tour. #PipeDreams

*Comment o' the Week: Saul- So much of it is marketing and perception.  The Folly's marketing is antiquated. Even the free billboards they get don't help much.  Delfeayo and Sean Jones just were not advertised well. I found out about it too late.  Burton and Chick are an easy sell... even at the Gem Theater with its horrendous sound system operator.  If I were a Kansas City jazz presenter I would spend a couple of days with Jon Poses (We always Swing)in Columbia. I would visit with Tim Whitmer and the KCJO on how to market things. Go to the source! Model the masters.  In my opinion, a large part of the population that lives on Facebook doesn't have the dough to attend events. People with money are working one or two jobs, saving and have a time management plan in their daily lives and not killing time on Facebook. They paln things well in advance becauese their schedules are so full of commitments.  The JCCC stuff is not well publicized and the Winterlude dates are the Carlsen Center "left over" dates....possibly the least desirable dates of the year. Sure there are a few ads but you need a PR MACHINE.God bless Doreen Morande at JCCC. She does good work but she is retired for goodness sake. How can you expect Doreen to be responsible for getting people in the seats....she is just one person.  The Carlsen Center and Blue Room have minimal accountability because they are well funded by the government or an endowment. The KCJO, Jon Poses and Tim Whitmer have major accountability. If their programs don't draw the series' end.

"Snoozing it up...?" Guilty as charged, Phonologotron. Actually, I can think of harsher ways to describe my iffy playing at the PVJF, but this year I was just grateful to get on and off the stage without being pelted by horizontal hail.

And thanks for properly acknowledging the "helpful" and "younger" rhythm section. No doubt they covered my sorry ass beautifully, even if two of them were 50-ish. But that is still younger by 20 or 30 years. I'm just a bottle of beta blockers away from John Knox Village and am struggling to keep my teeth.

But what's with the protective pseudonym, Phono? (Or should that be Mr. Logotron.) It seems to me that if you are going to post snarky quips about a recent jazz event you should have the spine to include your real name (which I doubt I've ever heard of). That way it will be easier for people to come to your gigs and check you out.

Which I would love to do.

Because my (real) name is Mike Metheny and I approve this message.

Consider the source! Phono is a wanna be player. I've heard him play. The dude needs to practice if he wants to be taken seriously as any kind of musician.