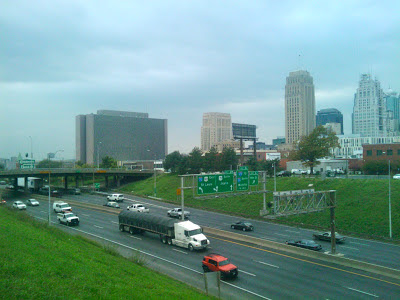 *The Pitch named Hermon Mehari "Best Collaborator".  (The publication didn't have any categories dedicated to jazz in its popular annual "Best of" edition.)

*Sue Vicory made an appearance on Fox 4 News to promote her Kansas City jazz and blues documentary.  Vicory was also interviewed by Steve Kraske.

*A nice profile of Marlin Cooper was published by the Wyandotte Daily News.

*Tweet o' the Week: Chris HazeltonB3- Hey @MayorSlyJames, we need to start advertising #KCJazz on a national level. Seriously, we've got something special going on in this city.

*Comment o' the Week: Matt Leifer- Anon, I'm not trying to undermine the importance of subtlety of phrasing and dynamics but not everything taught in school is relevant all the time. Maybe part of the reason younger generations don't listen to jazz is because it's too academic too much of the time.

High artistic standards are a must, and there's a time and place for everything, but I feel that sometimes "piss and vinegar," volume and balls are more called for than the alternative. Especially at a bar marketing toward a younger demographic. Nobody at Kill Devil is listening for subtlety of phrasing, they're looking for a kickass, swinging good time and loud is par for the course in a situation like that.

That's just my take on things.

*From Bad Cox: Composer and pianist Brad Cox will present a night of music written for his nine-piece ensemble on Sunday, October 21 at 8:00 p.m. at the RecordBar as part of Jeff Harshbarger’s twice-monthly jazz series.  The Brad Cox Nonet consists of a "double trio" configuration (two drum sets, two basses, and two tenor saxophones) augmented by three additional musicians playing percussion and keyboards… The musicians involved include saxophonists Rich Wheeler and Matt Otto, bassists Jeff Harshbarger and Ben Leifer, drummers Scotty McBee and Kent Burnham, percussionists Sam Wisman and Patrick Alonzo Conway, and Brad Cox on Rhodes electric piano.  Much of the music to be performed on the October 21 RecordBar date was written for Owen/Cox Dance Group’s upcoming fall performance, which will take place on October 26, 27 & 28 at the H&R Block City Stage Theater.

*From Take Five Coffee + Bar: Thursday, October 18, 7pm. Rob Scheps with special guest Shunzo Ohno. SPECIAL ENGAGEMENT: New York sax-man Rob Scheps has played at Take Five several times to outrageously big crowds and great reviews. This could be the best yet, as with him will be trumpeter Shunzo Ohno. Shunzo, a luminary in his own right, has played with Art Blakey, Gil Evans, Herbie Hancock and Wayne Shorter. And if you aren't a jazz historian, he's also played with Sting, Dave Matthews and David Byrne. If that wasn't enough, this man has overcome serious adversity to stay one of the best in the business. Go read his story at www.shunzoohno.com, then make absolutely sure you get to Take Five early to get a seat for this performance. Roger Wilder on piano, Bob Bowman on bass, Ryan Lee (back in town for a visit) on drums. No reservations accepted.

Friday, October 19, 8pm. Matt Otto Trio.  Saxophonist Matt Otto’s intensity and command as an improviser, composer and leader will keep us rolling into the weekend in the company of Ben Leifer, bass, and Mike Warren, drums.

Saturday, October 20, 8pm.  Jerry Hahn and Friends.  Renowned jazz guitarist Jerry Hahn will grace Take Five with his trio, featuring Everette DeVan on the organ and Mike Warren on drums. If you haven't seen him yet, do so. You’ll hear stories spun on guitar strings in a way few others can do.

*From Fanny Dunfee: Alaadeen Enterprises Inc. announces two recipients of this year's annual Alaadeen Awards of Excellence. The outstanding achievements of these individuals were acknowledged at the Kauffman Center for the Performing Arts in Kansas City, Missouri on September 14, 2012. Kerry Strayer, artistic director for the Kansas City Jazz Orchestra, presented the awards during the band's Tribute to the Count Basie Orchestra. The Alaadeen Awards Of Excellence include Jazz awards in two categories: The Alaadeen Achievement of Excellence Award and The Alaadeen Educator of Excellence Award. The recipients are recognized for their creative approach, originality and their ability to reach beyond technical excellence in Jazz music.

The Alaadeen Achievement of Excellence Award recognizing artistic excellence in Jazz performance was presented to Dennis Winslett. Winslett began his study of the saxophone at the age of 9 in the historic jazz town of Kansas City. Upon moving to Chicago, his full intense sound and high energy free swinging style of improvisation quickly earned him a reputation as an exciting young player to watch. Returning to Kansas City he served as director of education at the American Jazz Museum. Alaadeen and Dennis spent many hours together in which Alaadeen passed on an enormous amount of information to Dennis; passing the torch, so to speak to the next generation. Alaadeen writes about Dennis in his autobiography "Dysfunctional/life journeys of a second generation jazz musician:" "I first taught him when he was in Junior High in Olathe, Kansas and now he's become an excellent saxophonist. One time he played a solo for me. He thought he really killed it. And he did, too, but I told him, 'Yeah, that's Cannonball…now I want to hear Dennis.'

The Alaadeen Educator of Excellence Award recognizing excellence in Jazz education was presented to Kevin Mahogany for his role as a teacher in developing each student's uniqueness. Mahogany began his study of music as a child with piano and later learned to play the clarinet and baritone saxophone, performing with jazz bands and teaching music while still in high school.

A former student of Alaadeen's at The Charlie Parker Foundation, Mahogany exemplifies Alaadeen's belief that the role of the teacher should help the student gain the ability, technique and knowledge to put together a convincing story to tell. With eleven CD's as a leader, and quite a few as a sideman, he has proved to be the quintessential jazz vocalist. Newsweek describes him as " the standout jazz vocalist of his generation." New Yorker magazine writer Whitney Balliet writes, "There is little Mahogany cannot do." Says the LA TIMES, " Mahogany is one of the first truly gifted male vocalists to emerge in years." As a jazz educator, Mahogany has taught at the Berklee College of Music in Boston and the University of Miami.

On presenting the awards, Kerry Strayer the Artistic Director for the Kansas City Jazz Orchestra, commented: “The Kansas City Jazz Orchestra was honored to present the Alaadeen Awards of Excellence at our concert. Alaadeen was a vital part of the Kansas City jazz scene for many decades. His legacy will live on in the works and deeds of his many students and colleagues as they follow his example of passing this music on by sharing it freely with others. Congratulations to Kevin and Dennis.”

(Original image by Plastic Sax.)
Posted by Happy In Bag at 8:19 AM

2012 Rhythm & Ribs Jazz and Blues Festival was a success despite the periods of significant rain that occurred in the early afternoon of October 13.

Not having the outdoors for people impacted the attendance for sure, but there were at least a few thousand people who rotated through the American Jazz Museum spaces and venues over the course of the day.

I think the success of the event is a direct reflection upon everyone who came out and also a good case for positive reflection upon any questions of people supporting live music in KC!