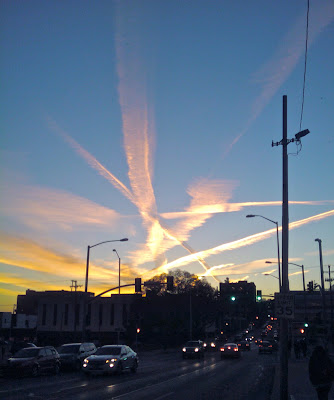 *KCUR notes the 100th anniversary of the Gem Theater.

*KCJazzLark commends the promotional efforts of the Blue Room, the Majestic and Take Five Coffee + Bar.

*A reviewer for The Kansas City Star seemed to enjoy Vijay Iyer's concert Friday at the Folly Theater.  Phonologotronic also raves about the show.

*The Joplin Globe provides an update on Ken Rosberg's Jazz For Joplin project.

*"Ballad For an Optimist" is among the new compositions Chris Burnett will perform November 3 at Take Five Coffee + Bar.

*Multi-instrumentalist Mike Stover has assured me that Lauren Krum's debut at Take Five Coffee + Bar on Saturday, October 27, will be a jazz-oriented performance.  Krum is the vocalist for alt-country act The Grisly Hand.

*Plastic Sax received a shout-out from a "veteran celebrity journalist" at the 4:30 mark in a jazz blogging webinar produced by the Jazz Journalists Association.

*Comment o' the Week: Anonymous- Pointless anachronism??? Stop trying to be cute. IMO the world could use more Jim Hall and less rap. I'm all over this one!

*From Jim Mair: Swing jazz at its best is on tap for the second in the “Jazz by the Lake” series at Kansas City Kansas Community College Thursday, Nov. 1.  Featuring the Bram Wijnands Trio, the free concert will be held from noon-1 p.m. in the Conference Center adjacent to the Campus Lake at the State Avenue end of the College campus at 7250 State Avenue...  He will be joined by two other KCKCC adjunct instructors, guitarist Rod Fleeman, a three-time Grammy nominee, and percussionist Jurgen Welge, a native of Germany who came to the U.S. more than 20 years ago…    The “Jazz by the Lake” series is held the first Thursday of each month. The Everette DeVan Quartet featuring Eboni Fondren drew a standing room only crowd in the opening performance. Still ahead in the series is the Joe Cartwright Trio Dec. 6, Diverse Feb. 5, Chris Hazelton and Friends March 7 and Tim Whitmer April 4.

(Original image by Plastic Sax.)
Posted by Happy In Bag at 10:07 AM