We're Just Lucky So and Sos 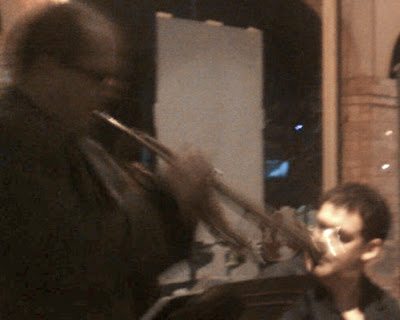 "I love this place," a friend told me Friday at Lucky Brewgrille.  "They don't have to have jazz- but they do."

It's true.  The popular establishment in Mission, Kansas, is an unlikely venue for live jazz.  Yet the televisions are muted in the suburban bar and grill most every Friday evening as guitarist Ron Carlson leads a jam session.  The superb Rob Scheps was Carlson's featured guest artist on October 12.

Scheps didn't play his signature tenor saxophone while I was at Lucky Brewgrille, but his distinctive sound was evident as he performed with a flute and a soprano sax.   His forceful personality was also in full effect.  Every "suggestion" he made to his band mates led to a marked improvement.

A few people were obvlivious to the exceptional mainstream jazz, but a couple dozen patrons hung on every note.  (Note to managers of other establishments- these jazz fans represent found revenue.)  My tasty nine dollar barbecue chicken salad was so large that I could barely finish it.

(Original image of Clint Ashlock and Rob Scheps by Plastic Sax.)
Posted by Happy In Bag at 1:03 PM

Lucky Brew Grille is a cool place. Thanks to Ron Carlson for his good work. Yes, the barbeque chicken salad is a great menu item.